The Oak from The Woodland Companion by John Aikin (1815). Digital version courtesy of The Library of Congress

Amidst today’s alarm at our state of disconnection with nature, there’s a tendency to assume that in the past everyone possessed a detailed knowledge about the natural world.  So it’s rather comforting to learn that in the early 19th century John Aikin (1747 -1822) decided that a tree identification book was needed to assist the many children (and adults) that didn’t know an oak tree from an ash.

The Woodland Companion, first published in 1802, begins with a frank assessment of the nation’s woeful lack of knowledge about trees:

‘The confined knowledge which young persons, and even those of advanced age, are usually found to possess of the noblest products of the vegetable creation, the trees which compose our woods and decorate our parks and pleasure-grounds, suggested to the writer that a brief description of them, in the form of a pocket-companion of the rural walk, might be acceptable.’

Like all the best pocket book guides, each tree in The Woodland Companion is accompanied by a detailed illustration of the leaves, flowers and fruits.  Aikin describes the size and shape of the trees and typical situations where they might be found.  He also takes time to inform us about the uses of the timber, revealing a world before mechanisation where wood was a material fundamental to every aspect of life, from architecture, transport, agriculture to the home.

After a career as a doctor, John Aikin (1747 -1822) took up writing in his retirement and was adept at producing material that a popular audience would enjoy.  He published many educational works about science, biography, poetry and the highly successful stories for children Evenings at Home which he wrote with his sister Anna Laetitia Barbauld.  The images used in The Woodland Companion were first commissioned by Alexander Hunter for his illustrated edition of John Evelyn’s Sylva (published in 1776 and re-printed several times).

I’ve included some of these fragile foldouts below with some details from Aikin about the trees and their uses.  There’s a link to the text at The Library of Congress at the very end of the post.

‘In our days, beech is a common material of the turner and cabinet maker; the former using it for his larger ware; and the latter, for common chairs and other articles of furniture.  It is, indeed, almost the only English wood employed by the London cabinet-makers.  Its lightness causes it to be chosen for the handles of tools; and it is split into thin scales for band-boxes, sword scabards, and the like.  The dried leaves of the beech make a very good stuffing for mattresses.’ 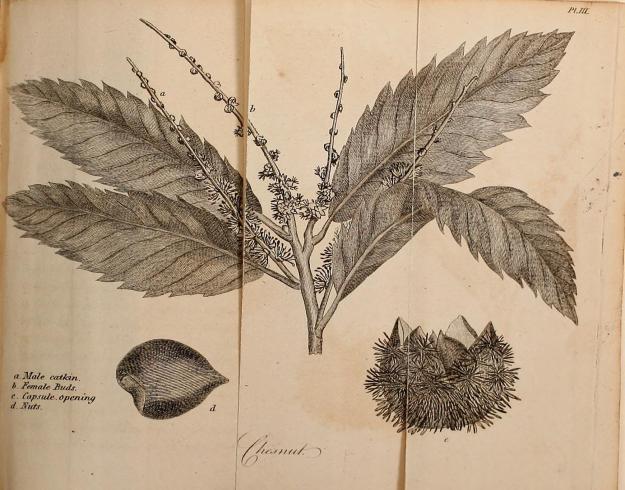 The chesnut:  ‘Among the mast-bearing trees this may be reckoned the most valuable, since its nuts, by their sweet and farinaceous quality, are rendered good food for man, as well as for other animals.  The chesnuts cultivated for their fruit are usually grafted ones, called by the French marronier;  and in many parts of the south of Europe they afford great part of the sustenance of the poor, who make bread of their flour.  In this country the fruit of the chesnut is small, and seldom comes to maturity; it is therefore left to the hogs and squirrels.’ 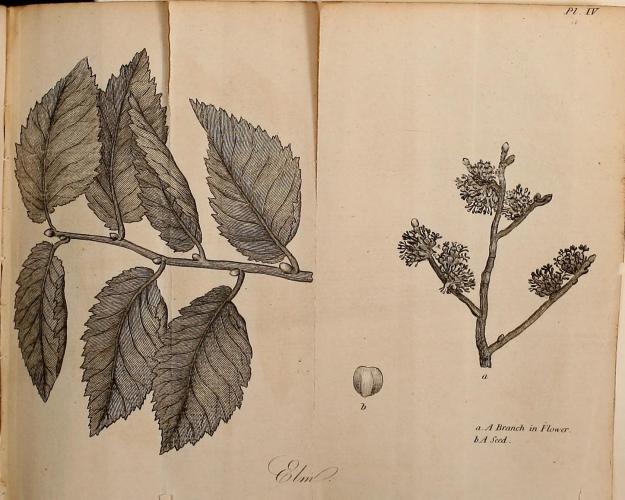 ‘The wood of the elm is hard and tough, and useful for a variety of purposes.  It is particularly serviceable for occasions which require its being kept constantly wet; as in the keels and planking beneath the water-line of ships, mill-wheels and water-works, and especially for water-pipes, the great demand for which is the cause of its frequency about London, and of the practice of training it without branches to a tall straight trunk, which may admit of boring in long pieces.  It is likewise used for axel-trees, naves, gate-posts and rails, floors, dressers, blocks &c. and it is very fit for the carved and ornamental works belonging to architecture.’

The ash ‘may be peculiarly termed the husbandman’s tree; for it is one of the principal materials in making ploughs, harrows, waggons, carts and various other implements for rustic use: hence a proportional number of ash-trees should be planted in every farm.’ 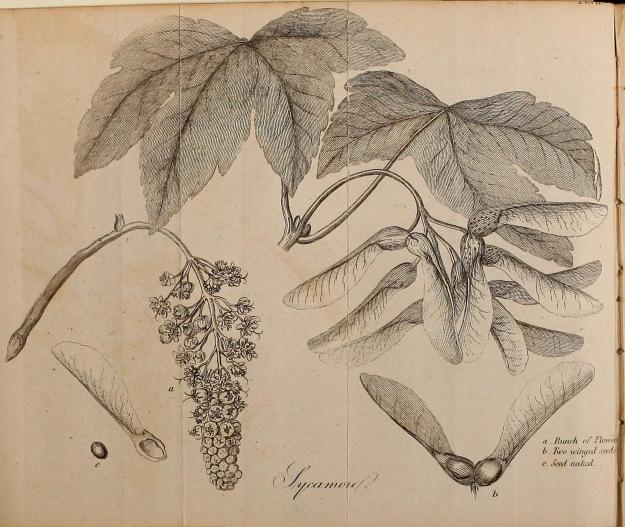 The sycamore: ‘It is not uncommonly planted in streets, and before houses, on account of its shade.  It also has the property of being less injured by the neighbourhood of the sea, and the dashing of the salt spray, than almost any other tree; and hence is often set in rope-walks in maritime towns.  It comes early into flower, and usually bears a vast profusion of pendent light-green bunches or catkins, which make a handsome show.  The flowers smell strong of honey, and afford much pasture to bees.’

The lime: ‘No tree is so much employed for avenues, and for bordering streets and roads.  Some of the straight walks of ancient limes, which modern taste has hitherto spared, are beautiful specimens of the pointed arch made by the intersection of branches, which has supposed to be imitated in the Gothic architecture of cathedrals.’

The horse chesnut: ‘This tree, which is originally a native of the East, has not very long been naturalized in England.  Its introduction here has been solely owing to its beauty, in which, in the flowering season, it certainly excels every other tree of its bulk that bears our climate.’

The hornbeam:  ‘It thrives well on a cold stiff clay, on the sides of hills, bears lopping and transplanting, and is capable of resisting the wind.  It is, however, principally cultivated as a shrub and underwood, and is excellent for forming tall hedges or screens in nursery grounds or ornamental gardens.  The wood of hornbeam is very white, tough and strong.  It is used for yokes, handles for tools, and cogs for mill-wheels, and is much valued by the turner.’ 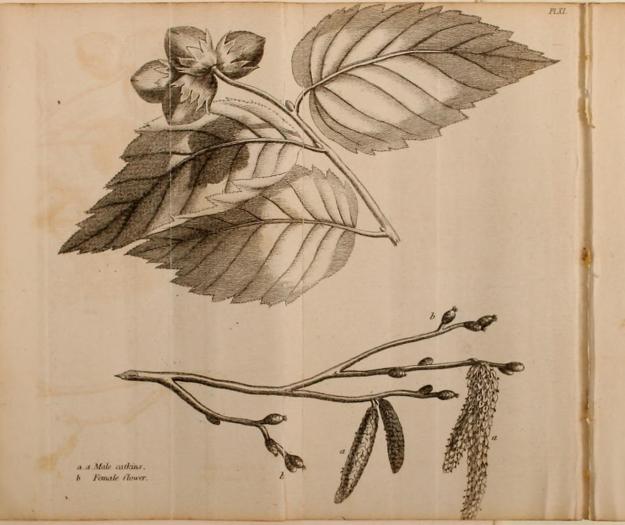 ‘Hazel charcoal is preferred to any other by painters and engravers, for the freedom with which it draws, and the readiness with which its marks can be rubbed out.  The nuts of the hazel are a generally agreeable fruit.  They abound in a mild oil, which may be extracted by expression, and is used by painters for mixing with their colours.’