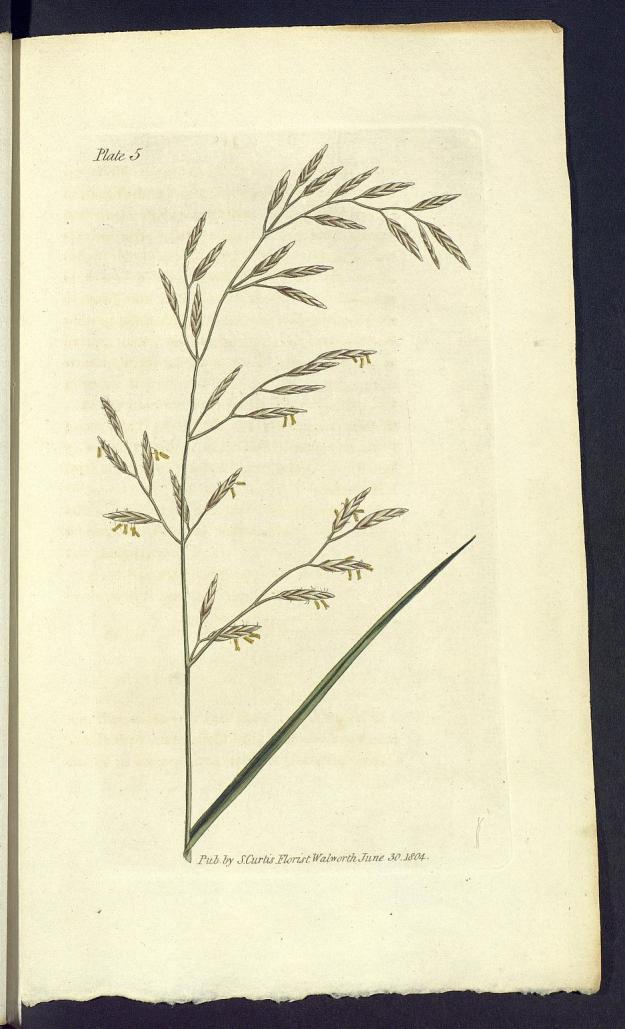 There’s a revival of interest currently in traditionally managed meadows with a particular focus on the native wildflowers they contain.  Appreciated for the biodiversity they support, these plants provide food and cover for insects and birds.  The flowers are also a natural spectacle for us to enjoy, and wrapped up in the meadow’s appeal is a certain nostalgia for the old ways of farming.

Today meadow grasses seem to receive only a fraction of the attention that is devoted to the flowers, but in the late 18th century a trend to make farming more efficient and scientific meant that horticulturalists like William Curtis (1746 – 1799) spent time researching the most productive grasses available for both cattle and sheep, and using these to create the ideal meadow.

Curtis published Practical observations on the British grasses: especially such as are best adapted to the laying down or improving of meadows and pastures: to which is added an enumeration of the British grasses in 1790.  Purchasers of the pamphlet (priced at ten shillings and sixpence) were entitled to a special packet of grass seeds, with which to establish their own meadow.

Some fourteen years later in 1804 the eighty page pamphlet was in its 4th edition, by this time published by William’s cousin, Samuel Curtis.  Samuel added new coloured illustrations and the seeds were now available from Samuel’s garden in Walworth.  (The previous address of William Curtis’s Botanic Nursery in Brompton has been inked out – although it’s still visible if you zoom in on the digitised version).

At the beginning of the pamphlet William Curtis expresses exasperation that the only grass seed available commercially for sowing pasture or meadow is Ray-Grass, which he says is widely accepted to be inadequate for the purpose.  Curtis discusses the virtues of a range of grasses, finally recommending six native to England which he believes to be the best.

‘The grasses recommended will, I am confident, do all that our natural grasses can do:  they are six of those which constitute the bulk of our best pastures; most of them are early, all of them are productive, and they are adapted to such soils and situations, as are proper for meadows and pastures.

But let no one expect them to perform wonders; for after all, they are but grasses, and, as such, are liable to produce great or small crops, according to particular seasons, or to the fertility or barrenness of the soil on which they are sown.’

These grasses were provided in the seed packet:

Ideal meadow recipe of grasses and clover to be sown at one bushel to an acre.

These grass seeds were intended for the farmer or landowner to grow on, until there were enough seeds to plant a whole meadow. It would take two years for the new meadow to achieve reach maturity, a considerable investment of time and effort.

The seeds were to be sown in rows according to their variety at the end of August, and regularly weeded and thinned if the plants were growing too close together.  The following year, the new seeds were saved for autumn sowing and the roots of the original grasses were divided to make more plants.  He says, ‘by degrees a large plantation of these grasses may be formed, and much seed collected.’  At the same time, the ground for the meadow must be, ‘got in order’.

‘.. perhaps the best practice (if pasture land) will be, to pare off the sward, and burn it on the ground; or, if this practice should not be thought advisable, it will be proper to plough up the ground, and harrow it repeatedly, burning the roots of Couch-Grass, and other noxious plants, till the ground is become perfectly clean; some cleansing crop, as potatoes, turnips, tares ,&tc. may contribute to this end.’

It’s interesting that Curtis suggests reducing the soil’s fertility by growing crops rather than removing topsoil, as is sometimes recommended today.  If planting a new meadow was impractical, an existing meadow’s productivity could be improved, Curtis says, by harrowing the ground and planting the same seed mix, but in a smaller quantity.

Thinking back to today’s ideal meadow full of wildflowers, Curtis mentions comparatively few flowering perennials as useful plants for livestock.  He recommends several species of clover, with dandelion and the ribwort plantain as useful early spring grazing for animals hungry after winter.  This kind of mixed meadow could be cut twice, he says – in May and then again in July or August.

An invaluable guide to anyone considering wishing to re-create a traditional grazing meadow or pasture today, it’s also a reminder that our ideas about agriculture are always developing. 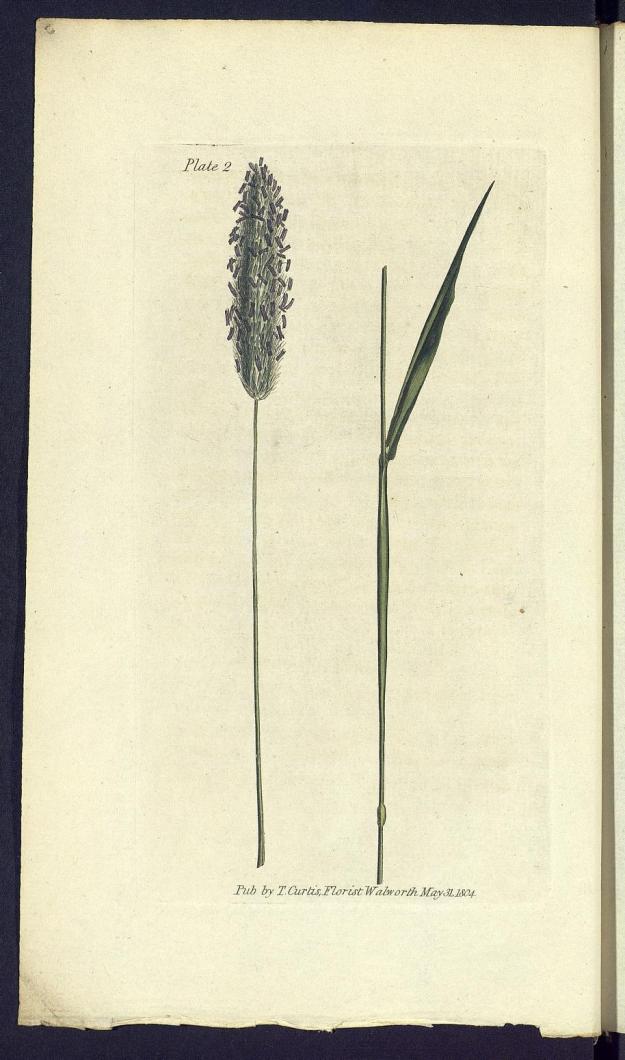 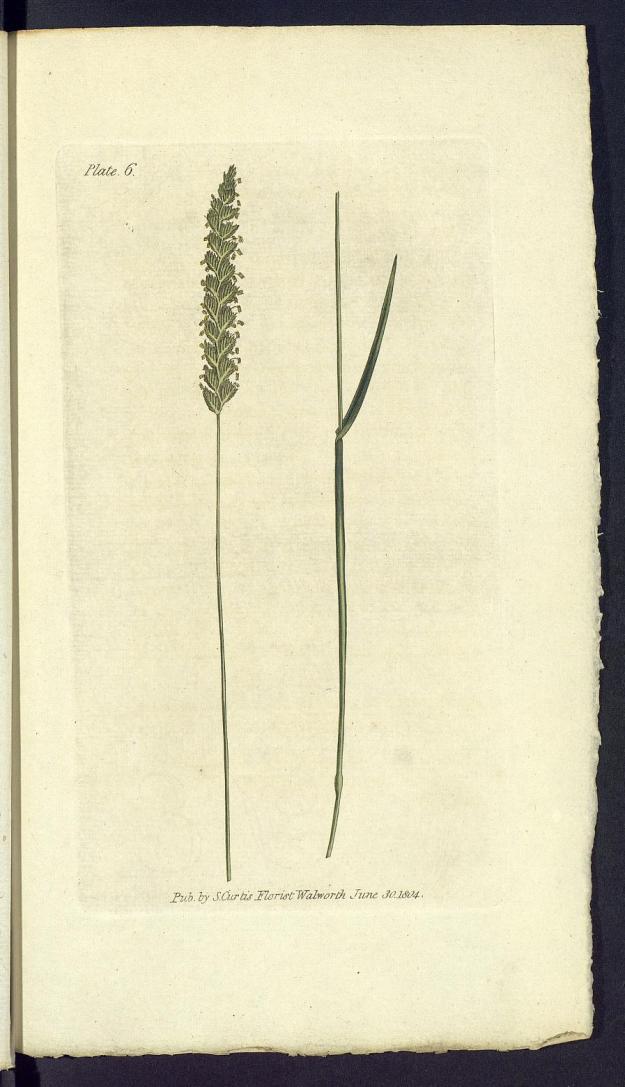 Reflecting on what animals like to eat, Curtis is reminded of when his garden in Brompton (Kensington) was invaded by hares. (Almost impossible to imagine today). The plant they ate is now called Luzula nivea or the snow rush.

Practical Observations on the British Grasses (1790)
from the fascinating Perkins Agricultural Library at Archive.org.  Walter Frank Perkins of Hampshire, UK (1865-1945) collected over 2000 books on British agriculture published up to the end of the 19th century. The collection was donated to the University of Southampton Library with the proviso that free open access was maintained. In keeping with his wish, books from the collection are now being digitised and made available from Internet Archive and the Biodiversity Heritage Library. Further details of the collection are available in the Perkins Agricutlural Library guide.

Meadow planting is enjoying a wave of popularity right now both in private gardens and public spaces.  As well as looking natural and beautiful, the variety of flowers and seeds they produce offer great benefits to wildlife, such as pollinating insects and birds.

But what are the origins of the meadow these modern plantings reference and attempt to re-create?  Broadly, the inspiration is the traditional hay meadow, where grasses and other plants were grown to be cut and dried, supplying winter fodder for cattle.  In today’s decorative meadows the balance between grasses and flowers tends towards the dominance of flowers, but when hay was still a crop, grasses were the most important plants in the meadow.

Benjamin Stillingfleet’s illustrated study Observations on Grasses (1762) gives some valuable insights into the 18th century meadow.  In this brief account, he explains how meadows were planted and managed, and discusses in detail the best  grasses for a good hay crop.  Stillingfleet’s research on meadow grasses is intended to educate the farmer so the most suitable kinds of grasses can be grown.  He observes how, until recently, the study of these grasses has been neglected,

‘The farmer for want of distinguishing, and selecting grasses for feed, fills his pastures either with weeds, or bad, or improper grasses; when by making a right choice, after some trials he might be sure of the best grass, and in the greatest abundance that his land admits of.’

Stillingfleet criticises the imprecise way in which farmers acquire seed, which was generally collected from their own hay stack or from a neighbour.  The disadvantage of sowing this mixture is that weeds are introduced; ‘I have seen it filled with weeds not natural to it, and which never would have sprung up, if they had not been brought there.’  Stillingfleet’s solution is to gather very specific grass seeds, so that the mixture contains the best kinds of grasses for the type of soil and situation, and weeds can be kept to a minimum.  He describes enlisting the help of children to perform this task;

‘I have had frequent experience how easy it is to gather the seeds of grasses, having employed children of ten or eleven years old several times, who have gathered many sorts for me without making any mistakes, after I had once shewn them the sorts I wanted.’

The charming illustrations of ten of the finest hay grasses are a valuable aid to the identification of these plants for the general reader, as grasses are quite hard to tell apart from descriptions alone.

‘Many people having expressed a desire that I should have plates of some of the profitable grasses added to this piece, that most excellent man, the late Mr Price of Foxley, whose extraordinary character I shall always revere, and do intend to give a sketch of on some future occasion, kindly condescended to employ his pencil, which in the opinion of the best judges was equal to things of a much superior nature, in making me several drawings from the plants themselves, and a very able hand has supplied the rest and engraved them all.’

One of the most beautiful grasses to be found in the hay meadow is the meadow fox-tail which grows to around a metre in height, and was also considered one of the best for high quality hay.

‘I am informed that the best hay which comes to London is from the meadows where this grass abounds.  I saw this spring a meadow not far from Hampstead which consisted of this grass chiefly with some of the vernal grass and the corn brome grass. It might be gathered at almost any time of the year from hay ricks, as it does not shed its seeds without rubbing, which is the case of but few grasses.’

Benjamin Stillingfleet (1702 – 1771) was a naturalist and author, accepted as one of the first in England to use the principles of Linnaeus in his botanical studies.  His portrait by Zoffany hangs in the National Portrait Gallery.

The modern meadow is unlikely to be harvested for cattle, and the flowers it contains may well include non-native species.  But meadow plantings using indigenous plants blend so well with the English landscape and its vernacular buildings, and seem to tie these elements together seamlessly.  Mass plantings of ordinary plants like buttercups and cow parsley have a freshness and radiance at this time of year which can stop you in your tracks.

Vernal grass  ‘It is very plentiful in the best meadows about London, viz. towards Hampstead and Hendon.’

Meadow foxtail grass (Alopecurus pratensis)  One of the taller grasses, to approx 1m. 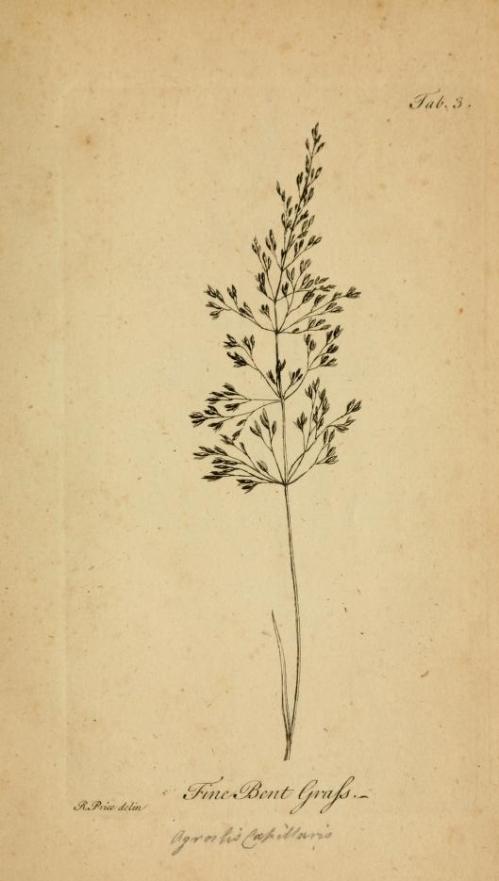 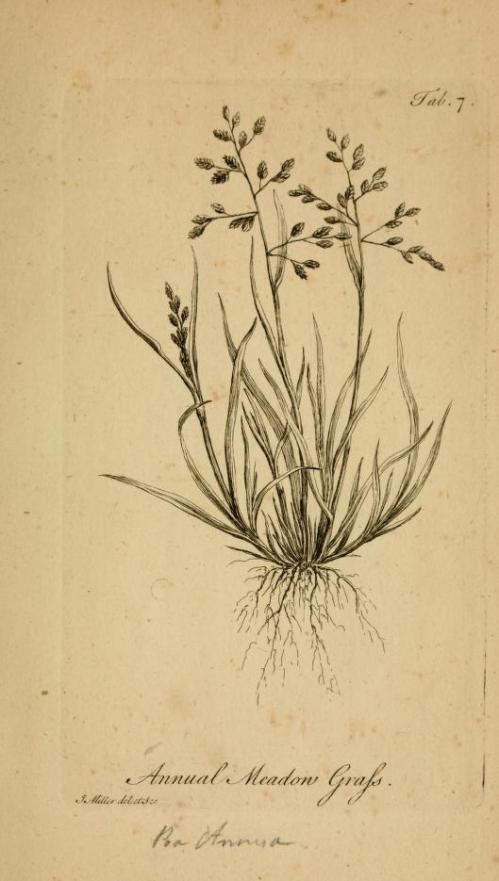 Annual meadow grass  ‘This grass makes the finest of turfs.  It is called in some parts the Suffolk grass.  ..as some of the best salt butter we have comes from that county, it is most likely to be the best grass for the dairy.’ 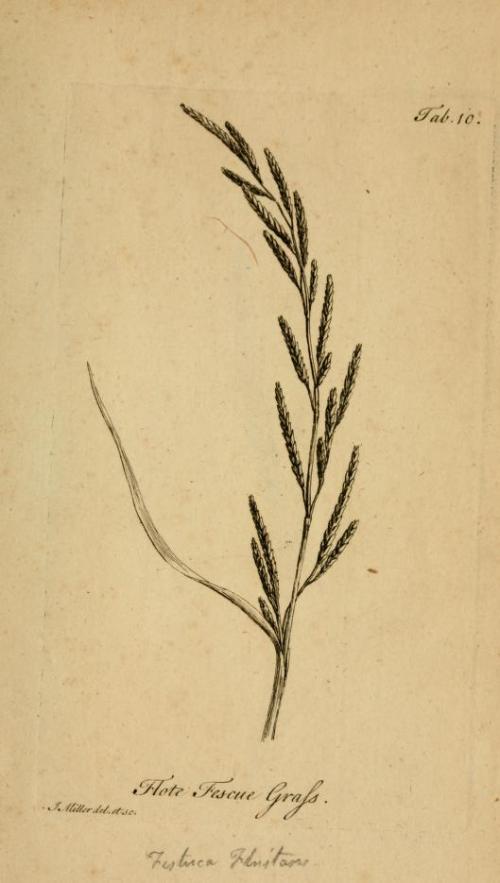 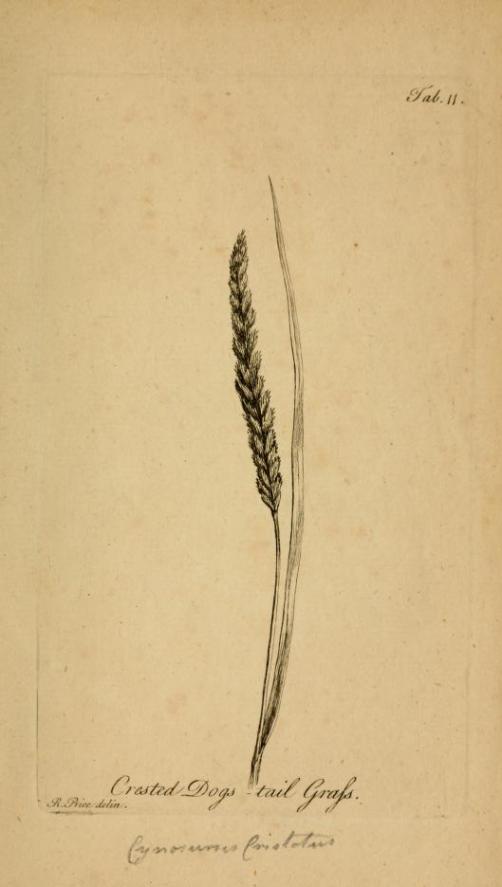 Crested dogs-tail grass  ‘This grass I imagine is proper for parks.’ 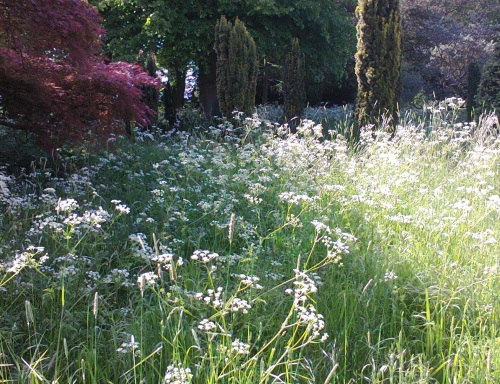 Observations on Grasses from Archive.org