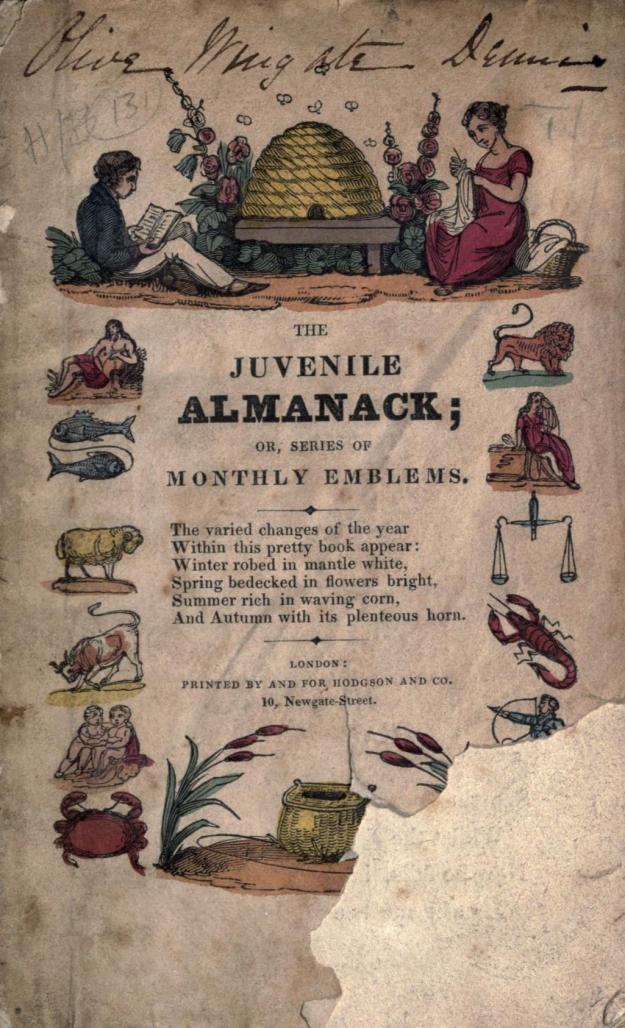 The Juvenile Almanack, or, Series of Monthly Emblems published by Hodgson & Co, 10 Newgate Street, London between 1822 – 1824.  University of California Libraries, via archive.org

The varied changes of the year
Within this pretty book appear:
Winter robed in mantle white,
Spring bedecked in flowers bright,
Summer rich in waving corn,
And Autumn with its plenteous horn.

As British Summer Time officially ends this coming Sunday, it seems like a good time to consider our relationship with the seasons.  Those who find this a melancholy time of year, with its diminishing day lengths and the inevitable descent into winter, will perhaps draw some comfort from this modest book – a celebration of each month of the year.

Published almost two hundred years ago, The Juvenile Almanack, or, Series of monthly emblems encourages children to observe the sights and take delight in the experiences offered by every season.  Taking inspiration from traditional English almanacks, containing information about phases of the moon, the tides, and all important weather predictions, vital for agriculture, The Juvenile Almanack adapts this format for the young reader.

Coloured illustrations draw the reader into each monthly scene, making children central characters in the seasonal pattern.  Focusing on small everyday details, we learn about the weather, the activities of people working in the fields, and seasonal games and pastimes to look forward to.

Starting in snow covered January, boys skate on a frozen pond, while February affords opportunities to watch birds feeding on crumbs near to farm buildings.  Signs of spring are evident in March with the sun at last bringing some warmth to a tender houseplant on the cottage windowsill, and in April people begin to venture out to their gardens, looking for early flowers like snowdrops and crocus.

By June and July, the hay meadows are ready for cutting, followed by the wheat harvest in August, with workers crowding the fields, and gleaners gathering the last remains of the harvest.

As the last of the crops are cleared in September the hunting season begins, and in October fruit is gathered.  We see Hodge, a colloquial name for a farm labourer or rustic worker, with a ladder propped against the tree, picking apples.  November brings bonfire night and December a welcome break from school for the holidays.

Each evocative illustration in The Juvenile Almanck shows details of the vernacular landscape in this period; the cottages, their gardens, fences, haystacks (here, covered in canvas against the winter weather) and style of clothes worn by both adults and children.  It’s a community in close harmony with the seasonal rhythms of England.

If we are looking to re-connect with the seasons, working outside in the garden is one very effective way to do this, as we learn to find pleasure in the gradual changes each month brings.  Now we are mid-way through October, the signs of autumn are unmistakable – it’s windier, colder, the leaves are changing colour, and this great season is truly underway.

Link to The Juvenile Almanack below: 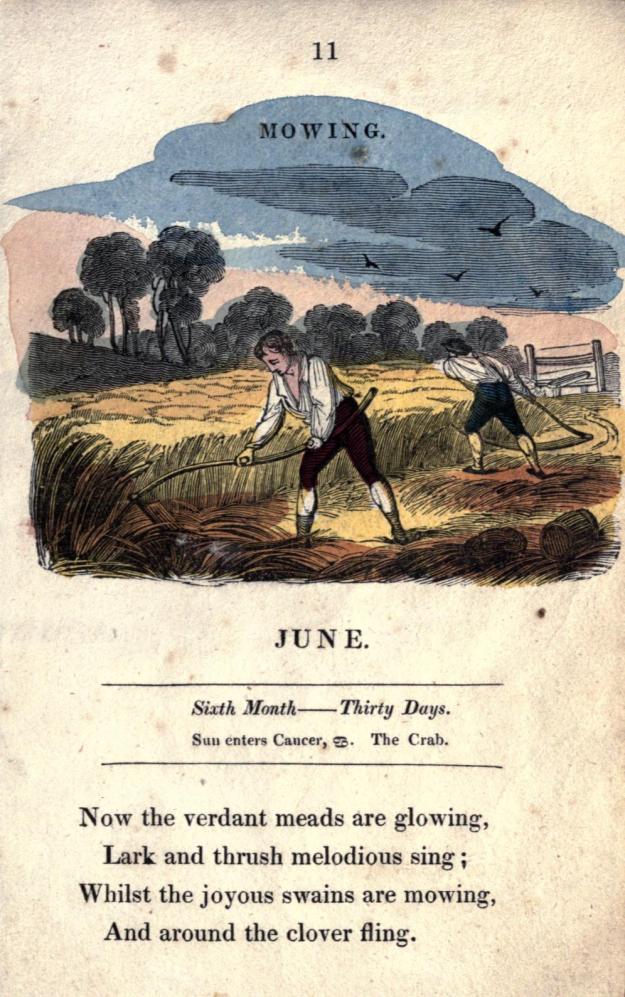 Over one hundred English and British almanacs at archive.org 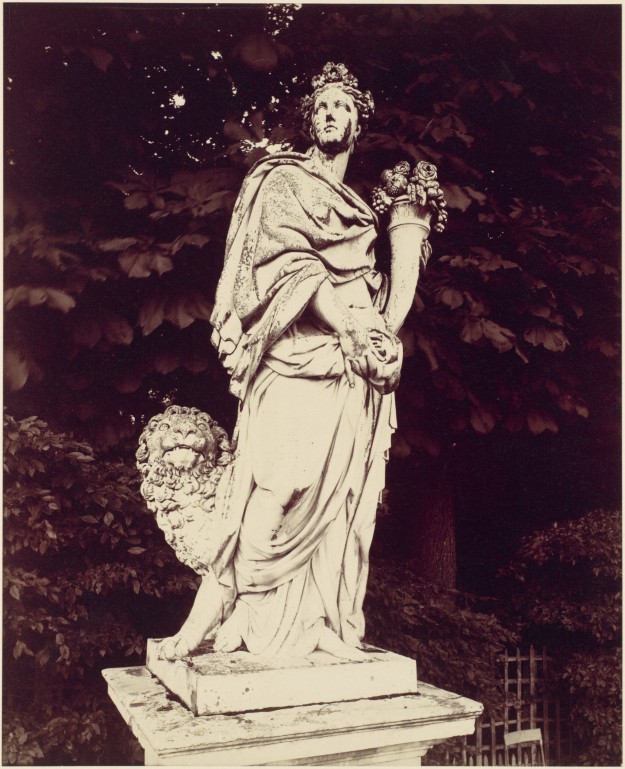 Towards the end of his life, photographer Eugène Atget made repeated journeys from his home in Paris to the palace of Versailles.  His photographs of the gardens, in particular their sculpture and ornaments, evoke a strong sense of the unique atmosphere of this place in the 1920s.

People are noticeably absent in Atget’s Versailles, giving the gardens a slightly mysterious feel.  But closer inspection shows a flower bed has been stripped out and awaits new planting – suggesting that gardeners have recently been at work here.  And what of the abandoned chairs which frequently appear next to the statues?  The sculptures form a strange but intriguing juxtaposition with these domestic scale chairs, and Atget seems content to leave the chairs randomly placed, as he finds them, allowing them to suggest a narrative.  Who last sat here?  And how did one of the chairs come to be overturned?

Atget’s photographs also explore the relationship between the sculptures and their background of trellis and foliage.  In summer, the whiteness of the stone looks crisp against a dark background of leaves, but against the natural shapes of the bare winter trees the sculptures start to seem less confident in their setting, and secondary to nature.  The monumental Arc de Triomphe, celebrating France’s victories in battle, looks melancholy covered in autumn leaves, the face of one of the heroes cast in almost total shadow.

A pioneer of documentary photography, Eugène Atget (1857 – 1927) is best known for his photographic survey of the rapidly disappearing streets of old Paris, as swathes of the city were re-developed by Haussmann in the 19th century.  Trained as an actor, he explored a career as a painter, but eventually took up photography in the 1880s.  In the early 1920s he became financially independent after selling thousands of his negatives, and so was able to pursue personal photographic projects.

Atget referred to his photographs as ‘documents’ and marketed his services to artists, providing location views of landscapes and buildings – useful source material to plan angles and perspectives.  To some extent, this explains the emotional detachment in his work, and the emphasis on the subject rather than the creator.  A rare biographical photograph of his studio shows ordered shelves housing the equipment and paraphernalia of his trade, but little suggestion as to the character of the man himself.

Atget’s detached style seems appropriate for Versailles, faithfully recording its scale and grandeur, but sometimes in the details revealing tensions and doubts, introducing a counter-narrative to the royal wealth and power on display.

More information about Eugène Atget and his work in the links below: 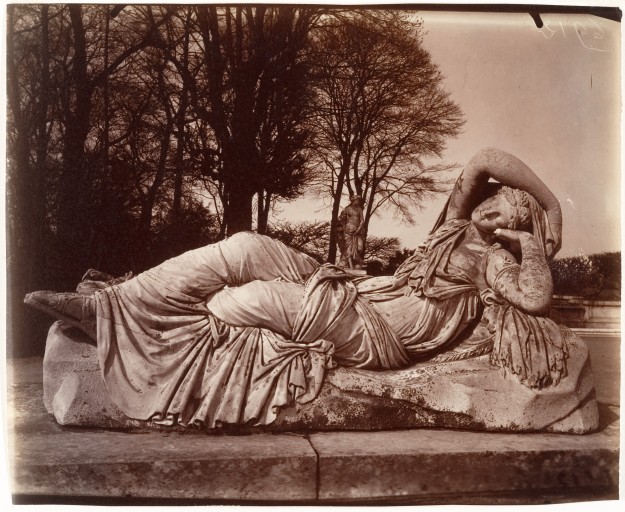 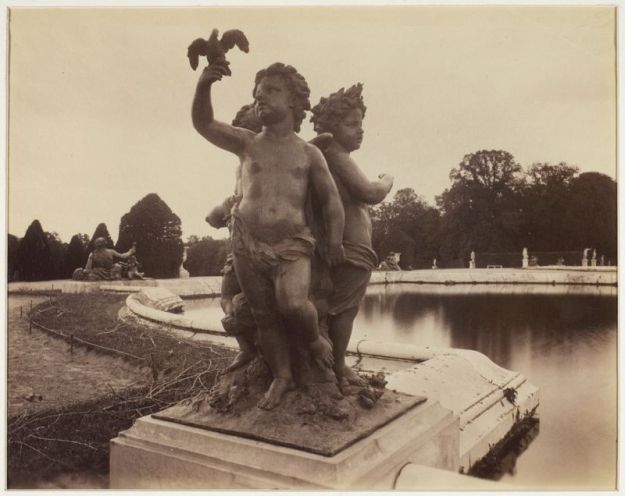 Steps next to the Orangery, Versailles. (Metropolitan Museum of Art, Wikimedia Commons) 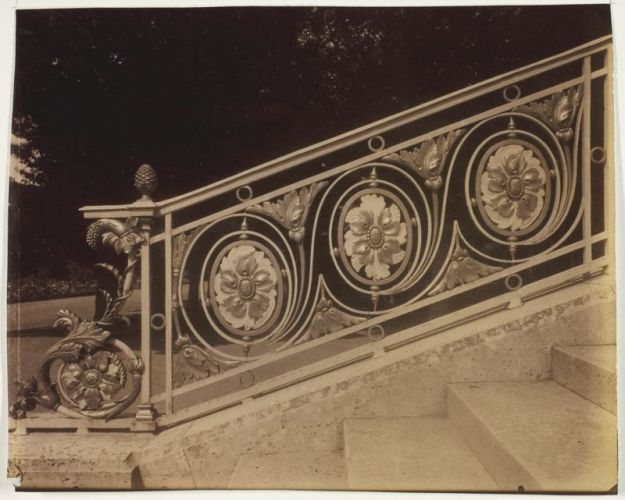 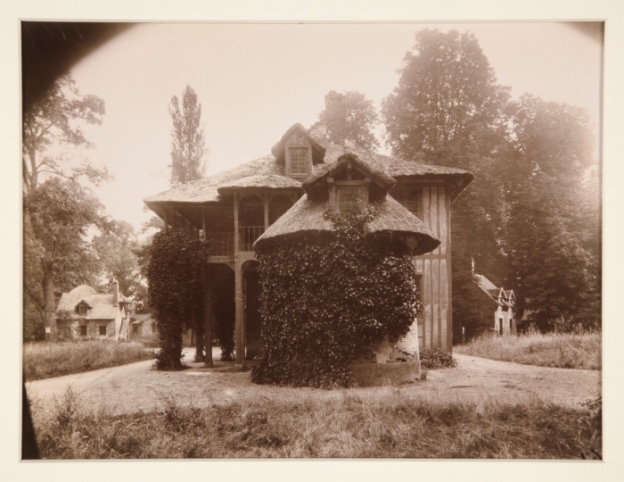 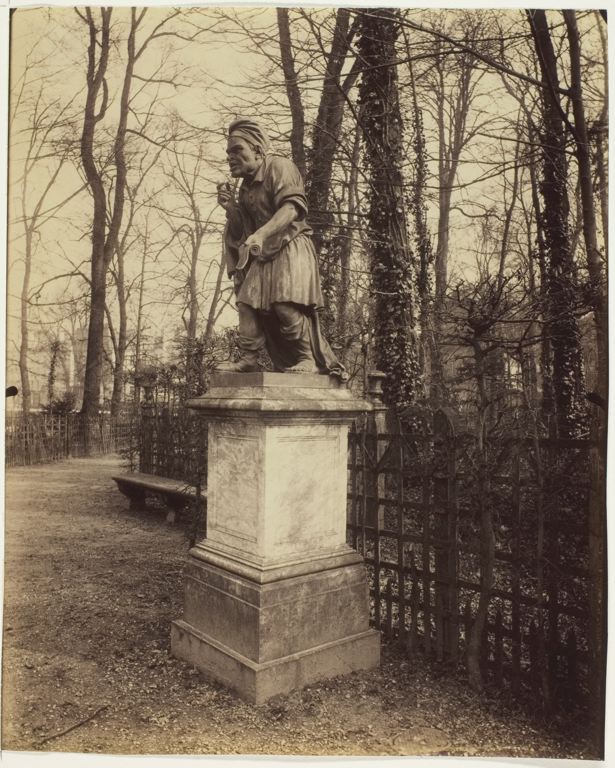 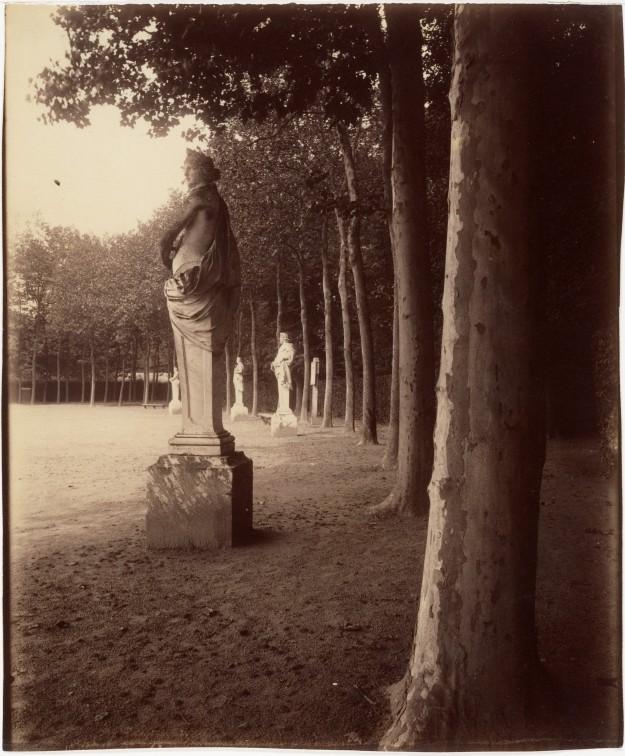