Located in the tranquil Somerset countryside, Hauser & Wirth’s arts centre just outside Bruton is a destination both for modern art – and its gardens.  Landscaping for the entire site has been designed by Piet Oudolf, and the Oudolf Field, described as a one acre perennial meadow, is its centrepiece.

Entering the Field, grass paths of varying widths weave through the dense planting, allowing visitors to experience the immersive effect of bold blocks of grasses and flowering perennials.  Nearest to the gallery buildings is a concealed pond area which was attracting dragonflies on the day we visited in August, and at the top of the Field is a pavilion designed by Smiljan Radic.

Here in this meadow garden, created by one of the world’s best known landscape designers for an international art gallery, it seems like a good moment to consider the status of gardens as an art form.  In that context, the Oudolf Field feels very much like a living installation.

The term ‘meadow’ suggests planting that is loose and informal, and this introduces an immediate conundrum for the visitor.  The detail of Oudolf’s design is very tightly controlled, and while in August the overall effect of the mature planting is one of meadow-like irregularity, this belies a rigidity that underpins the design.

The perennial plants are placed and ordered with great precision – much as they might have been in a 17th century parterre.  But unlike a parterre garden, this design is not symmetrical,  and instead of being clipped into artificial patterns, the plants  are chosen for their wilder character, and allowed to keep their natural shapes.

Beds edged with corten steel meet manicured grass or gravel pathways, providing the crisp edges we’d expect in a traditional formal garden. This contrast between formality and informality is one of the trademarks of Oudolf’s style, working best when all the elements are meticulously maintained – which is certainly the case at Hauser & Wirth and a great credit to the skill of their gardeners.

Oudolf uses lots of contrasts in his planting, and some of these create almost painterly effects.  Hazy fine textured grasses are a favourite, as are the diffuse patches of green and yellow produced by perennial plants like Amsonia hubrichtii.  This interesting plant carries small pale blue flowers in May and June on stems covered in fine needle-shaped leaves.  These turn yellow and orange in autumn, providing intense splashes of colour amongst the paler grasses and forming a backdrop for flowers with an upright habit, such as veronicastrum and agastache.

In other areas, blocks of perennial flowers with rounded shapes like sedums (Hylotelephium), echinacea, helenium and various umbellifer species form a pleasing contrast with the flower spikes of persicaria, lythrum and perovskia.

Oudolf’s gardens are designed to reach their peak from late summer through autumn, and the plants are left to die back naturally – their structures providing winter interest and acting as a seedbank for birds.  In February and March everything is cut back to ground level and the growth cycle begins again.  Perhaps it is not intentional, but sculptor Richard Long’s Stone Circle (1980) located close to the pavilion seems to echo this circle of life theme.

Well worth a visit when travel becomes possible again – some links to Hauser & Wirth and Piet Oudolf’s website below: 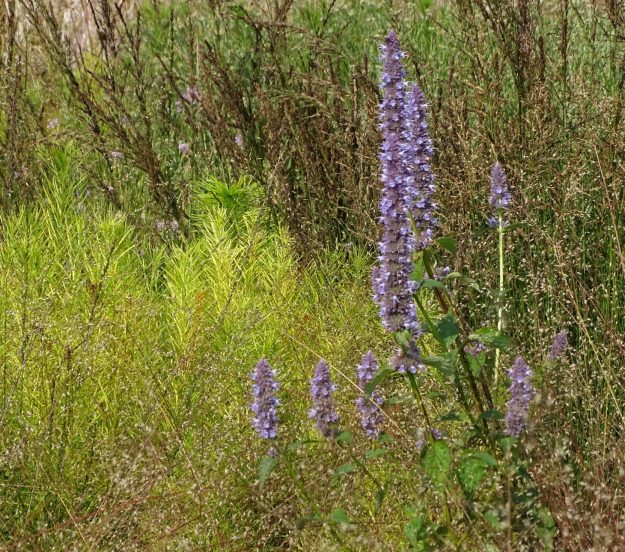 Lythrum (centre) with Dianthus carthusianorum, or Carthusian pinks in the foreground

Contrast of texture and colour with purple Hylotelephium (sedum) in foreground, the yellow grass Carex elata ‘Aurea’ behind 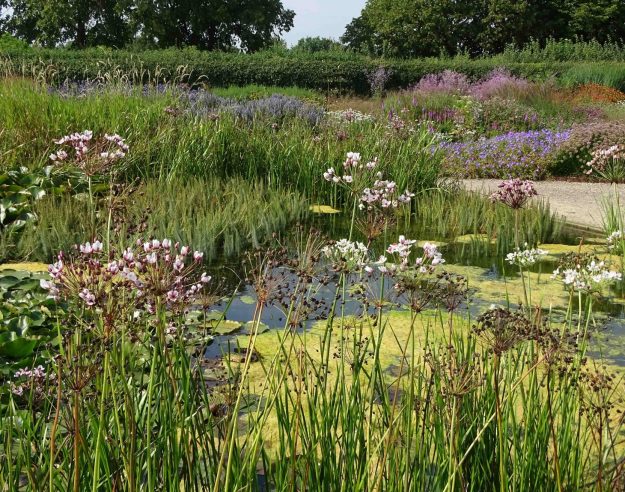 The pond at Oudolf field was attracting dragonflies on the day we visited. The flowering rush Butomus umbellatus in the foreground

Plan of Hauser & Wirth, Somerset showing a simplified design of the Oudolf Field 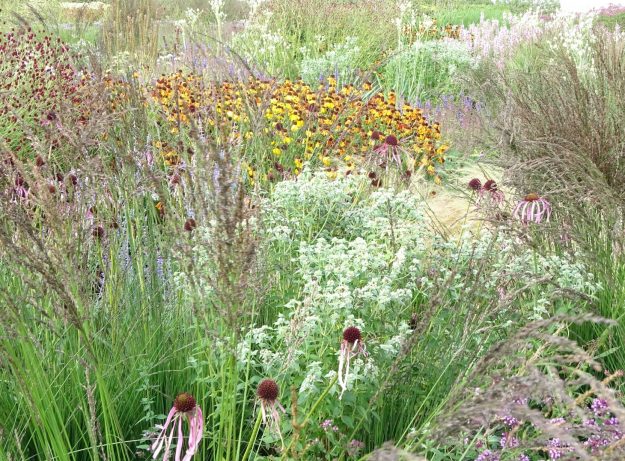 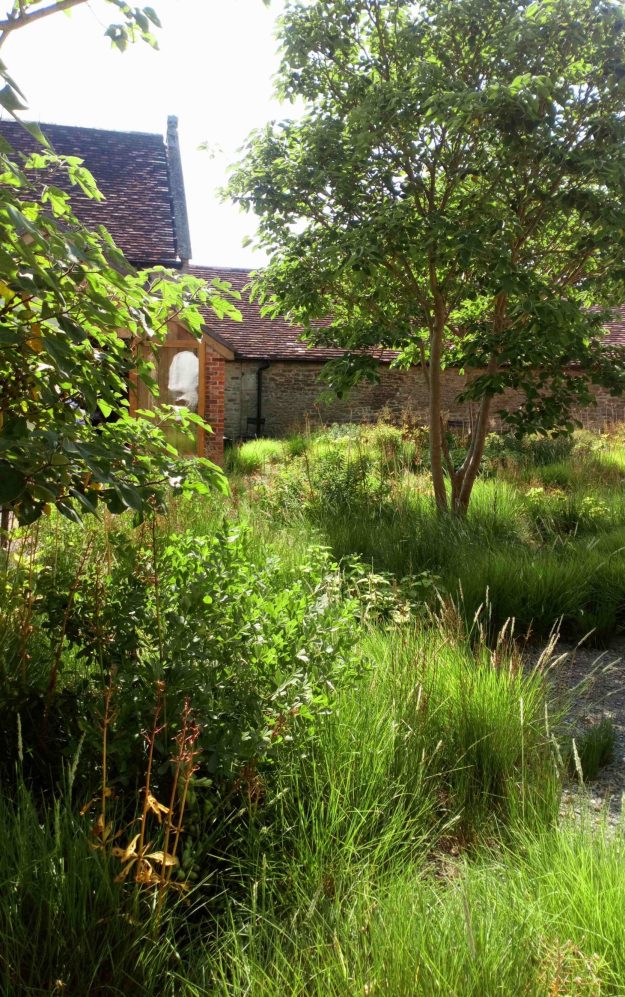 Oudolf’s design for the gallery courtyard. The late season grass Sesleria autumnalis brings a freshness to the planting

This year marks the 50th anniversary of the death of plantsman, writer and designer Karl Foerster.  As well as breeding hundreds of perennial plants, Foerster was instrumental in pioneering a planting style that was both naturalistic and sustainable using hardy plants suited to local soil conditions and climate.  His iconic nursery and garden at Potsdam-Bornim near Berlin which he managed from 1910 until 1970 is open to the public as a monument to his life and work.

Thanks to the European Nursery Catalogue Collection which has digitised over forty of Foerster’s catalogues, we have a fascinating record of the range plants he offered for sale, and glimpses of his garden.  His plant lists reveal a mixture of species plants and a range of perennials still very fashionable today, such as heleniums, day lilies, grasses and geraniums.

The Potsdam-Bornim garden (link at the end of this post) estimates that around a third of the plants Foerster developed are still in cultivation.  One of his favourite flowers was Phlox paniculata and he once remarked that a garden without this plant was ‘a mistake’.  He started breeding phlox in the 1930s and his nursery catalogues record pages of varieties, from palest pink to deep red tones.  ‘Düsterlohe’ with its rich purple flowers is still a bestseller.

Some of the catalogues contain planting plans showing customers how they might arrange plants purchased from Foerster.  The plans indicate how many plants of each variety should be used and suggests placing them together in blocks to enhance the effect of their contrasting forms and textures.

After training at the Schwerin Palace Gardens and the Royal Gardening School near Potsdam Foerster established his first nursery at Berlin-Westend in 1903 and re-located it to Potsdam-Bornin in 1910.  The garden produced potatoes and vegetables during the second World War, but in 1945 the Soviet military administration gave permission to operate as a nursery once more.  Foerster’s daughter Marianne oversaw the continuation of the garden from the 1990s until her death in 2010.

Foerster’s catalogues list plants developed by other famous nurserymen such as Georg Arendts in Germany and Bonne Ruys (father of the designer Mien Ruys) in the Netherlands.  Their names reveal a network of influential horticulturalists and designers exchanging plants and ideas.  Foerster’s influence can still  be detected in the work of designers today – here in the UK Beth Chatto’s garden and plant catalogues seem to share the same spirit with their plant selections, as do the palettes of plants used by Dan Pearson and Sarah Price.

The grass Calamagrostis x acutiflora ‘Karl Foerster’ was named after Foerster as a tribute to his work.  With its upright plumes turning a pale straw colour in winter, this plant is still a key component in contemporary planting schemes and it seems appropriate that the plant named for him remains so popular.

Foerster attached great importance to the garden as a haven for nature and his company logo, a stylised daisy-like flower surrounded by three butterflies, underlines this.  Fifty years on, Foerster’s philosophy of planting is more relevant today than ever, with our current challenge to create gardens that are friendly to wildlife and the environment.

Karl Foerster pictured in his 1964 catalogue.

Peony from the 1972 catalogue

Planting plans from the 1972 catalogue

Planting plan for shade, showing the canopy of two trees and stepping stones through the planting

Brightly coloured phlox from the 1957 catalogue

Front Cover of the 1972 catalogue showing Phlox paniculata ‘Eva Foerster’ in the foreground with ‘Aida’, ‘Flammenkuppel’ and ‘Fullhorn’.

Doesn’t this planting remind you of Beth Chatto’s garden?

I like the German word for water lily – Seerose. 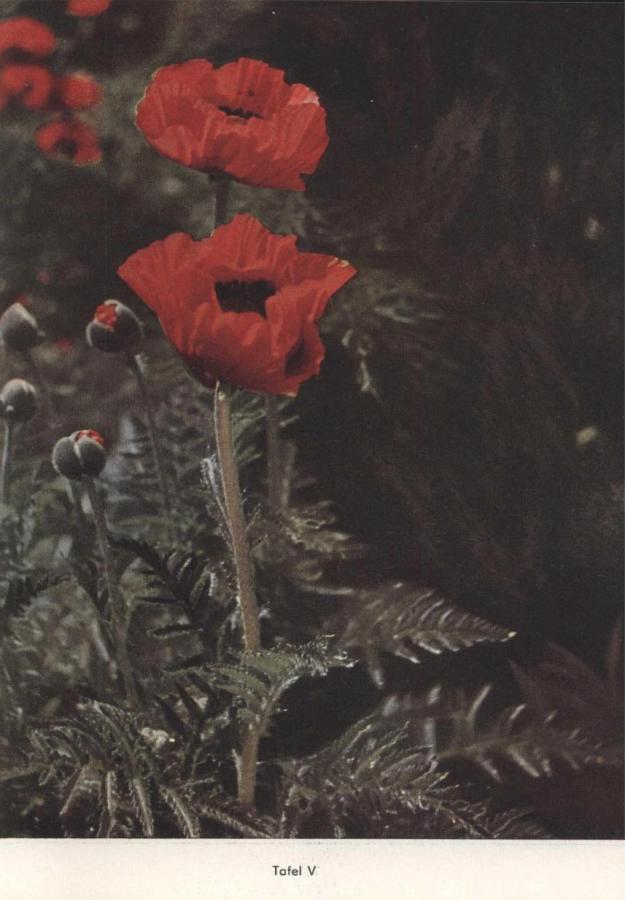 An order form from the 1967 catalogue

The garden at Potsdam Bornim

Molinia altissima from the 1967 catalogue 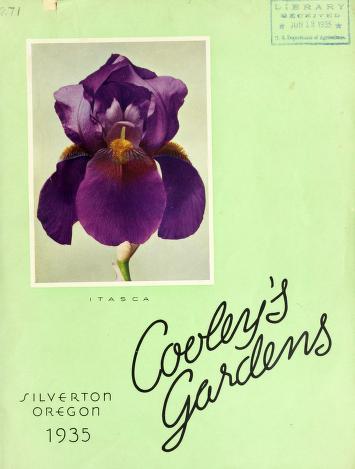 When Cooley’s Gardens closed its gates in 2011 after trading for over 80 years, this nursery had, in its heyday, been one of America’s leading suppliers of bearded irises.  Their catalogues show dozens of iris varieties for sale that were exported as far afield as Canada, Australia, and Europe, as well as their home market in the US.  Based in Oregon the nursery was the project of Rholin and Pauline Cooley and, as with many nurseries, was a hobby that in time became a business.  Selling herbaceous perennials with a special focus on tall bearded irises, some of their beautiful catalogues are preserved online via the Biodiversity Heritage Library.

Like many plants, tall bearded irises go in and out of fashion.  The bearded iris is probably considered by many to be too showy for today’s on trend naturalistic planting, especially as most recent cultivars have frilly edges to their petals, which combined with multicoloured flowers, makes them difficult to associate with simpler flower forms.

In 2007 gardener Sarah Cook was instrumental in reviving interest in the Benton irises, bred by the artist Cedric Morris.  Developed between the 1930s and 1960s  his irises display an elegance of form which modern varieties have lost, but can also be seen in the flowers from some of the Cooley’s early catalogues.  The Benton varieties are grown by Beth Chatto, and seem to integrate well in her garden, amongst the grasses and other sun-loving perennials.

Looking at the Cooley’s catalogues, it’s interesting to observe how tastes in these flowers developed through the 20th century.  The earlier hybrids from the 1930s have the languid look of silk gowns from that period, while by the 1950s the form of the iris flower has become more frilled, and stiffer, like prom dresses.  In the process, the flowers somehow seem to lose the elegance of the earlier hybrids.

Cooley’s catalogues from the 1930s show some very elegant flowers indeed. The large black and white photographs show the spacing of the flowers on the stem, which contributes to their poise, while the colour plates show their astonishing colours from browns and purples, to pinks and pure white. 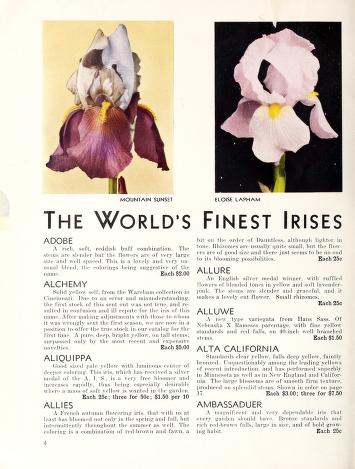 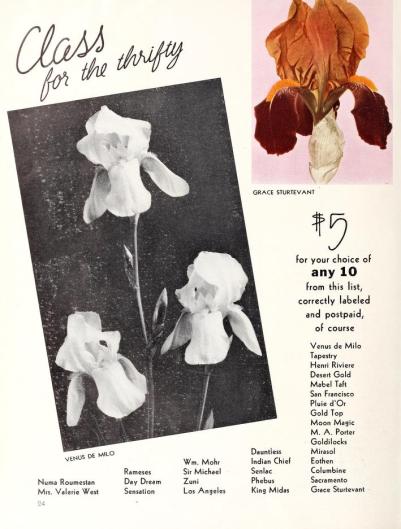 Venus de Milo (all white) and Grace Sturtevant from 1935 catalogue

Ethelwyn Dubuar, strikingly pink, according to the 1935 catalogue.

For their stock, the Cooleys teamed up with iris breeders, both professional and amateur, who supplied a constant stream of new varieties.  New introductions were expensive (some priced at as much as $20) and aimed at the serious collector, but this was balanced by ‘Bargains for Beginners’ and ‘Class for the thrifty’ where 12 plants of established varieties could be purchased for two dollars. 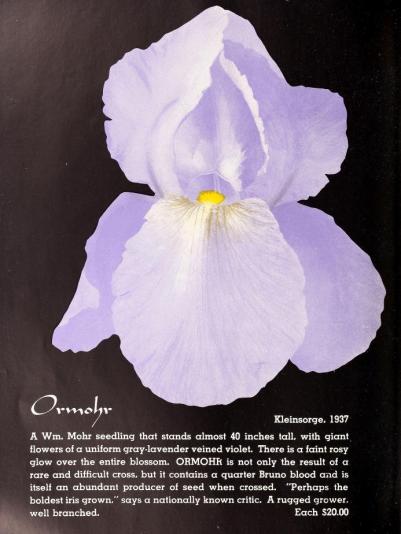 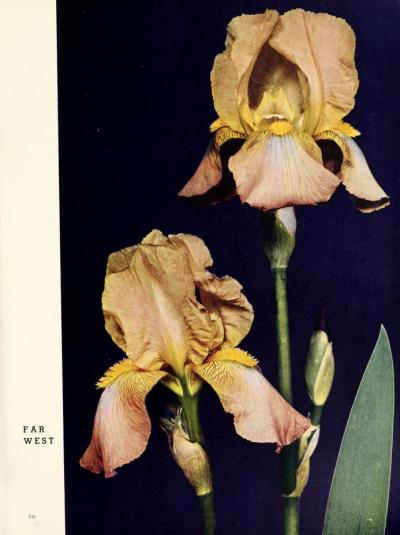 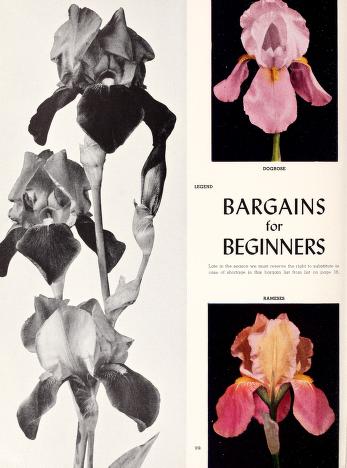 Dogrose, Legend and Rameses from the 1939 catalogue. 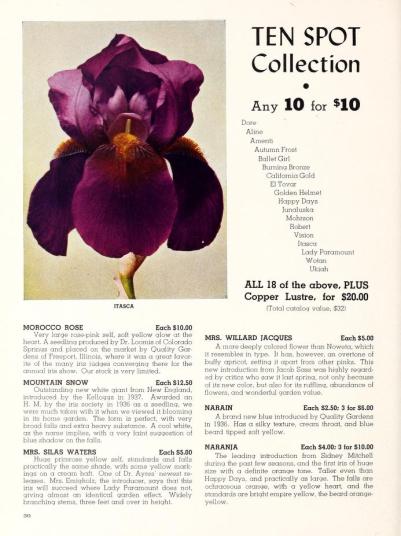 Itasca from the 1939 catalogue.

Treasure Island from the 1939 catalogue. 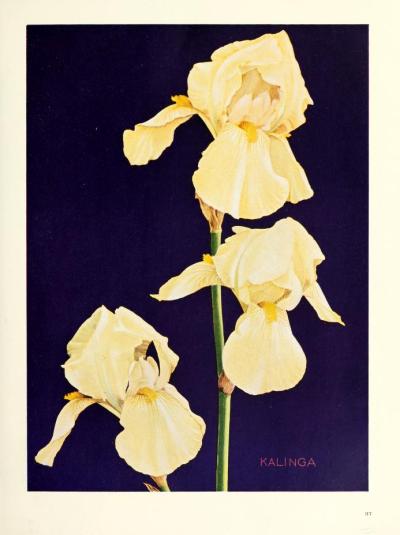 Kalinga from the 1939 catalogue. 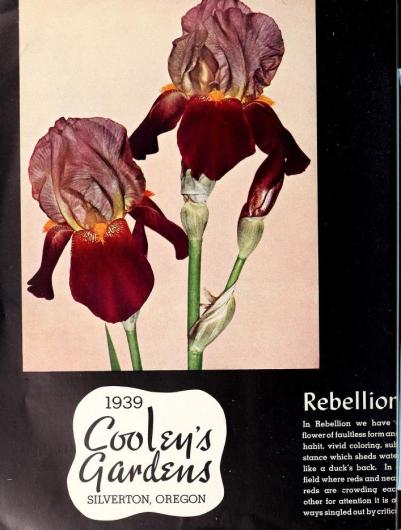 Irises from 1964 showing a more upright form with frilly petals

I’ve grown the deep purple flowered iris ‘Matinata’ for many years and love to see the dark, almost black, buds at this time of year, followed by the spectacular flowers.  This iris was bred by Schreiner’s in the 1960s, another Oregon based iris specialist.  Given the renaissance of interest in the Benton irises, perhaps it’s time to re-discover some more heritage iris varieties for our gardens. 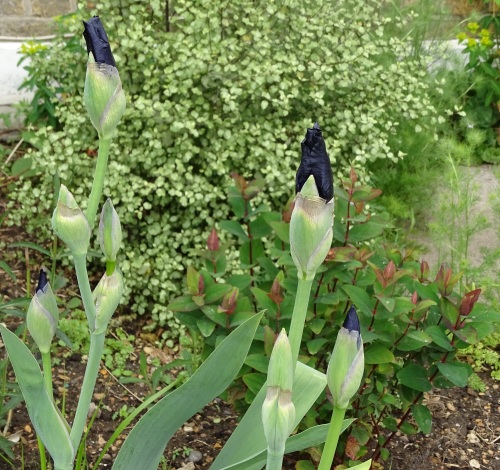 The quest for the Benton Irises (The Telegraph)