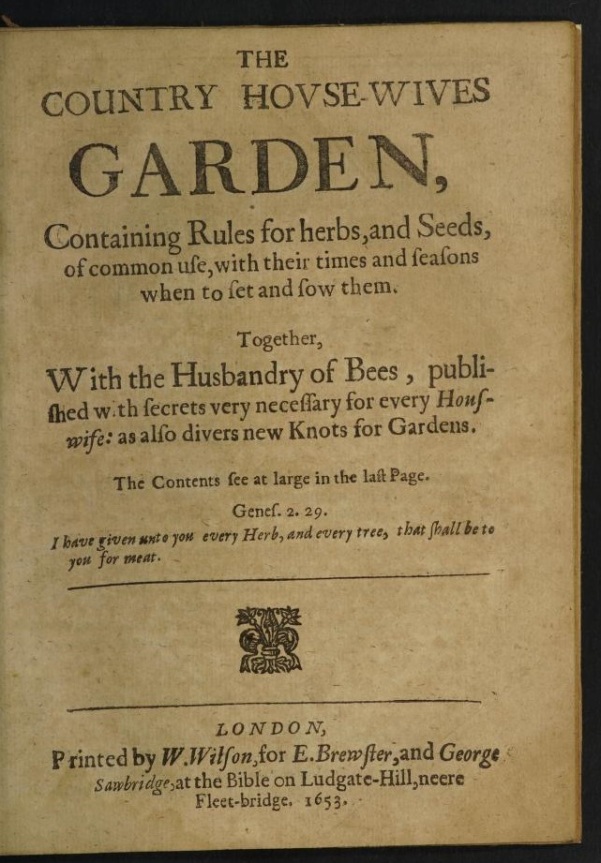 The Country House-wives Garden – the second section from a book entitled A new orchard and garden, or, The best way for planting, grafting, and to make any ground good for a rich orchard; particularly in the north parts of England by William Lawson (first published 1618)  From the Biodiversity Heritage Library

If you are curious to know what a knot garden looked like in a smaller domestic garden of the early 17th century, The Country House-wives Garden (1618) by William Lawson gives some intriguing insights into the vast range of designs, and plants that were used. Lawson includes in his book several knot patterns which could be followed or used as inspiration for an individual’s own design, remarking that ‘they are as many, as there are devices in Gardeners brains’.

The number of formes, Mazes, and Knots is so great, and men are so diversly delighted, that I leave every House-wife to herself, especially seeing to set downe many, had been but to fill much paper; yet lest I deprive her of all delight and direction, let her view these choice, new forms;

He suggests the knot should be located within a square area bordered with shrubs, and be planted up in late September.  Plants that might be used include roses, rosemary, lavender, bee-flowers, Isop (hyssop), sage, thyme, cowslips, peony, daisies, clove gilliflowers (carnation), pinks, southernwood and lilies.

One of the characteristics that distinguishes a knot garden from a parterre is that the lines in the knot design appear to cross over each other, as if the pattern has been made out of a continuous strand of thread.  This is achieved in the garden by using a combination of continuous and interrupted lines of plants, so that the continuous lines appear to travel over the interrupted lines.  Lawson’s first illustration shows how the ground for the knot garden is divided prior to planting using stakes and lines, so that the plants could be arranged accurately to make a geometric design.

William Lawson (1553/4–1635) was a Church of England clergyman based in Ormesby, Yorkshire.  His only book, A new orchard and garden, or, The best way for planting, grafting, and to make any ground good for a rich orchard; particularly in the north parts of England was first published 1618.  It shows a general audience how to plant and look after fruit trees, and provides glimpses of other popular garden features such as camomile seats and topiary (his ambitious suggestions include men in battle or hounds chasing deer).  The second section of the book, The Country House-wives Garden is aimed specifically at women, supplying general seasonal information about laying out and managing a garden for flowers, vegetables and herbs.

Planting suggestions for knots are also discussed in detail by John Parkinson . In Paradisi in sole paradisus terrestris (1629) he mentions sweete herbes clipped regularly to preserve the form of the knot, with the prunings used as strewing herbs for the house.  Germander, hyssop, pinks and carnations, lavender, thyme, savory and French or Dutch box were all popular, as was thrift, the summer flowers gathered, ‘to deck up an house’.  Cotton lavender or santolina is mentioned, but as a relatively new introduction to England it was only found in the gardens of the wealthy:

The rarity and novelty of this herb, being for the most part but in the Gardens of great persons doth cause it to be of the greater regard

Parkinson favours box for a knot garden, as it is evergreen, keeps it shape better than many other plants and is tolerant of a range of planting conditions.  He explains his secret of pruning the roots to stop them spreading and damaging other plants in the knot:

You shall take a broad pointed Iron like unto a Slise or Chessell, which thrust downe right into the ground a good depth all along the inside of the border of Boxe somewhat close thereunto, you may thereby cut away the spreading rootes thereof, which draw so much moisture from the other herbes on the inside, and by this means both your herbes and flowers in the knot, and your Boxe also, for that the Boxe will be nourished sufficiently from the rest of the rootes it shooteth on all the other sides.

Parkinson also mentions materials used to edge the beds of the knot garden including tiles, stones, oak boards, lead cut into the shape of battlements and, somewhat surprisingly, sheep shank bones, with rows of knuckle ends being visible above the ground.  However, he records that many people ‘mislike’ the shank bones and that they are not used widely.

The last word on knot gardens goes to Lawson.  His description of the garden as a place where ‘nature is corrected by Art’, defines the character of knot gardens perfectly, and at the same time perhaps, gives us a definition for all gardens:

And all these (plants), by the skill of your gardener, so comely and orderly placed in your borders and squares, and so intermingled, that none looking thereon cannot but wonder, to see what nature corrected by Art can doe. 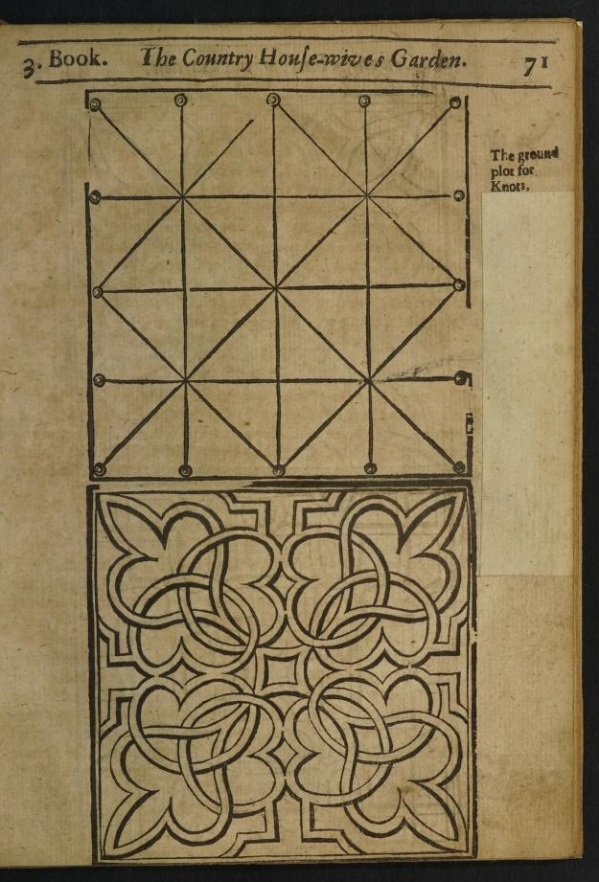 The ground plot for knots, together with a design for a knot. 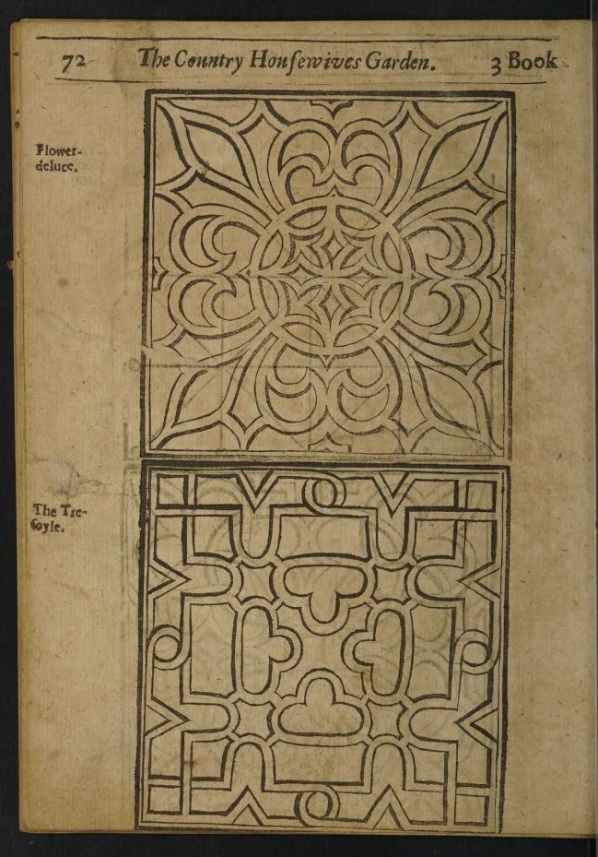 Designs for Flower de luce and The Trefoyle 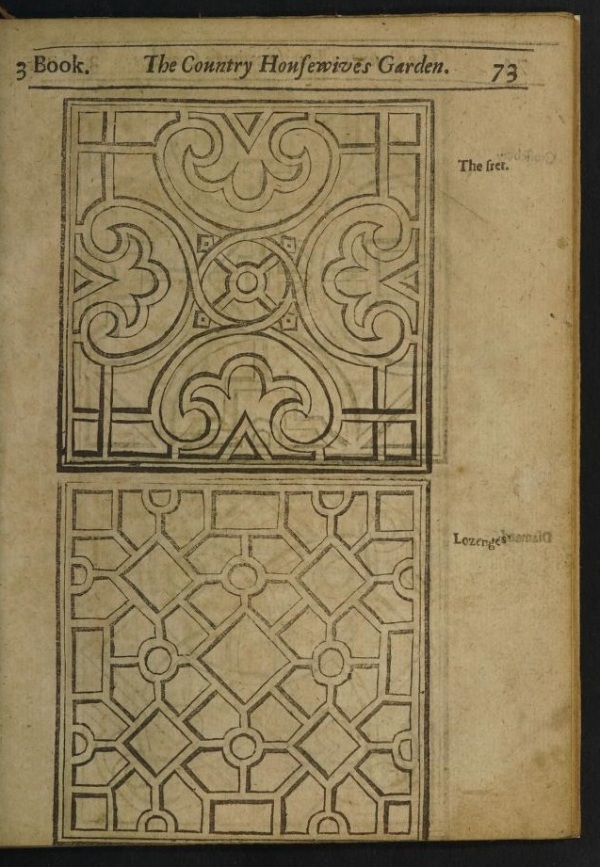 The fret and Lozenge 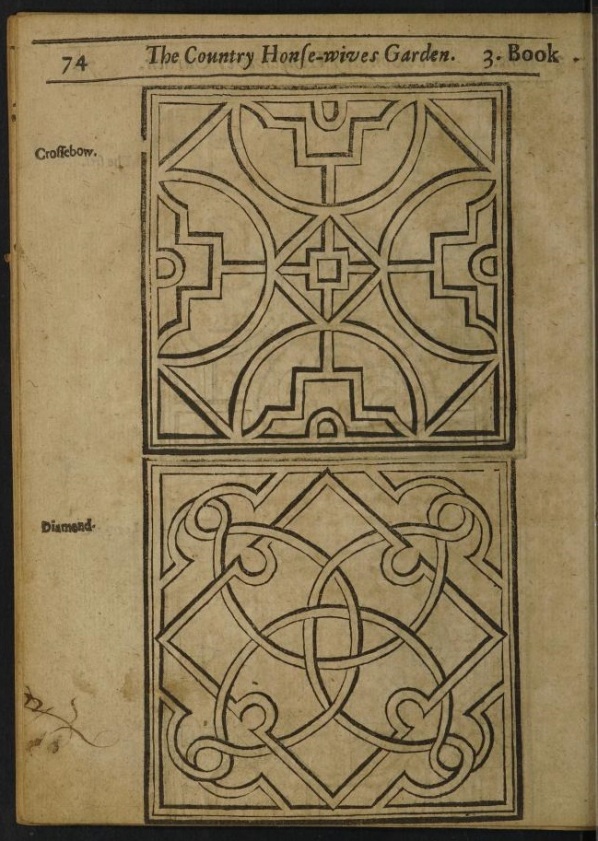 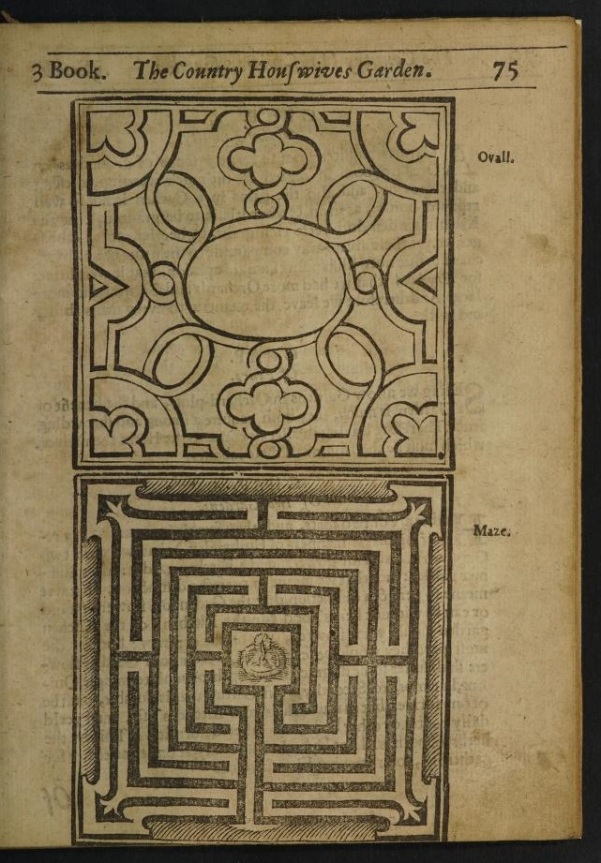 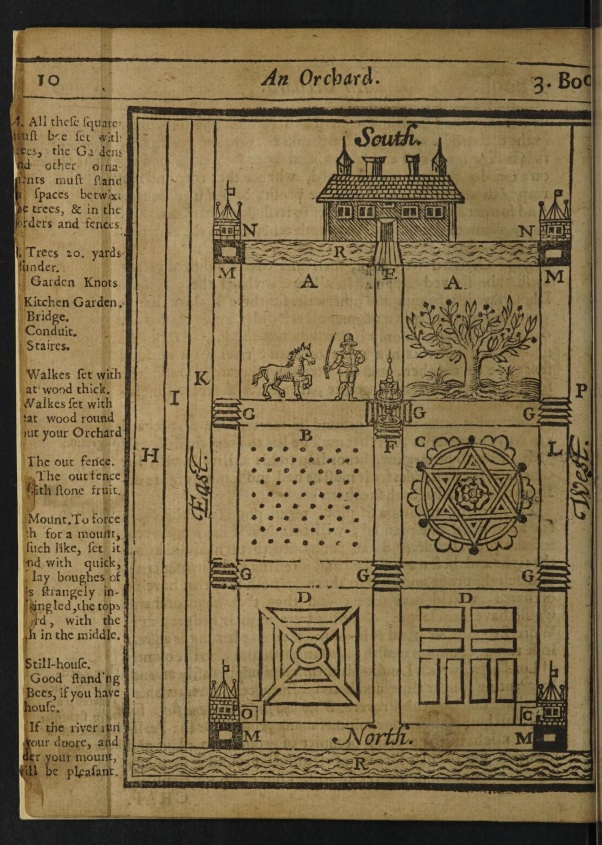 Plan of a late Elizabethan Garden from A new orchard and garden, (first published 1618) 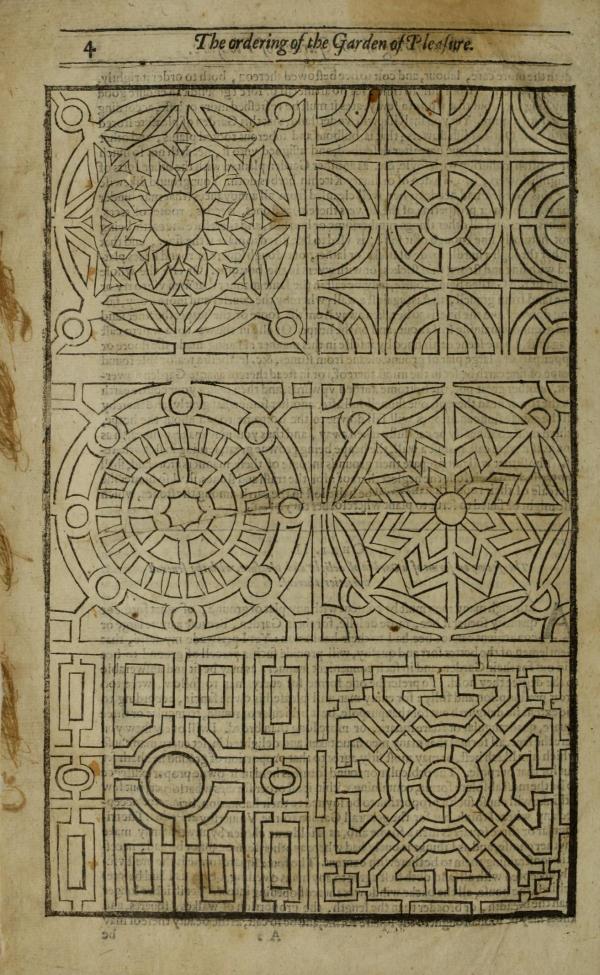