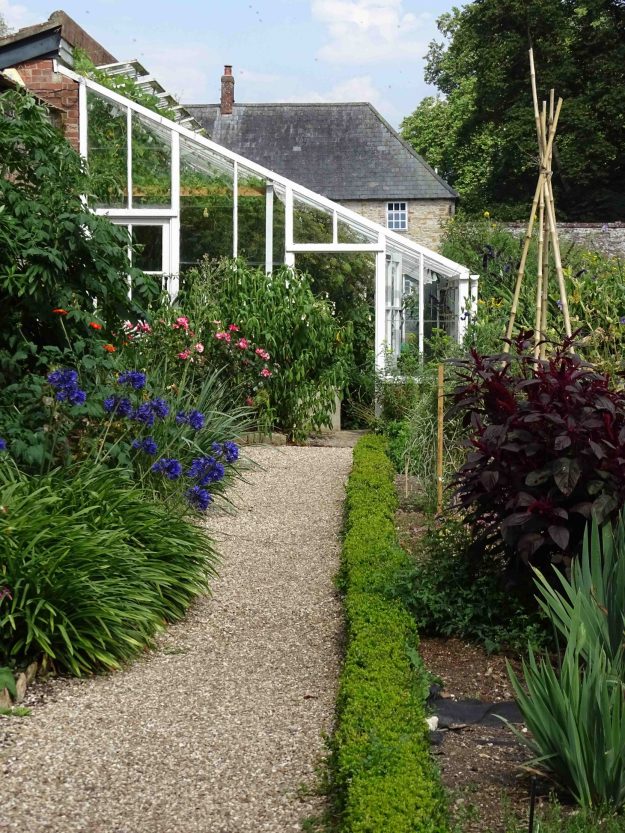 Glasshouses in the kitchen garden at Forde Abbey, Somerset

Last week temperatures soared, making the south of England feel almost Mediterranean.  Shade becomes invaluable in a heatwave, as we seek the relief of a garden seat carefully placed on a woodland walk, or close to the cooling sound of a stream.

Both trees and water are major elements at Forde Abbey gardens.   We arrived just as the Centenary fountain was due to be activated – at certain intervals in the day, a single jet of water powers 160 feet into the air, making this the tallest fountain in the UK.  Although the air was relatively still on the day we visited, the plume of water is sensitive to any variation in the direction of the breeze, changing its shape continually, and covering the surrounding area in a fine mist – a welcome effect in the 90 degree sunshine.

The Great Pond at the southern boundary of the garden was established over 800 years ago by Cistercian monks, and by means of channels, water from this source supplies the more recently added canal and ponds.  The gardens have been developed by a succession of owners over the centuries, including the most recent, the Kennard family, who installed the fountain.

The impressive walled kitchen garden was constructed in the 19th century and is now planted in a colourful, contemporary style against a background of traditional stone walls and glasshouses.  Sweet peas are trained against a tunnel made of rustic poles, covering a central pathway, and alongside the array of vegetables and fruit is a profusion of flowering plants.  Whether grown for cutting, or encouraging crop pollinators, all the blooms contribute to the sense of abundance and generosity which characterises the entire garden.

The large growing beds are edged with low box hedges.   Sometimes, hedging around smaller vegetable beds can look fussy as well as being a lot of work to maintain.  But here, and on this scale the box looks perfect, and has a practical purpose, in some areas acting as a retaining barrier for the soil which has been built up higher than the paths with the addition of compost over years of cultivation.

Permanent crops such as asparagus, rhubarb and peonies are planted in rows alongside annual sowings of brassicas, squash, courgettes and salad vegetables.  Orange flowers always seem to feel at home in a kitchen garden and there are many examples here, including French marigolds (tagetes), alstroemeria and Tithonia rotundiflora.

The outer walls of the kitchen garden form the backdrop for a spectacular herbaceous border and it was here that, rather unexpectedly, we met Alice Kennard, working in a large brimmed hat alongside her gardeners.  Alice tells us that the border is at least fifteen feet deep – about five paces from the wall to the lawn edge.  Ordinarily, without the complications of Covid 19, much of the produce from the walled garden would be used in Forde Abbey’s kitchens catering for visitors and events, but this year much is for sale in the estate’s shop and staff are encouraged to take home what they can.

In the intense heat, I found a few precious pockets of shade in the walled kitchen garden, from which these photographs were taken.  Forde Abbey’s Grade 1 listed buildings currently remain closed, but the 30 acre garden is open daily.  More photographs of the gardens and information about Forde Abbey’s history and opening times here: Forde Abbey   Some of the covetable plants seen in the herbaceous borders are available from the Abbey’s excellent plant nursery. 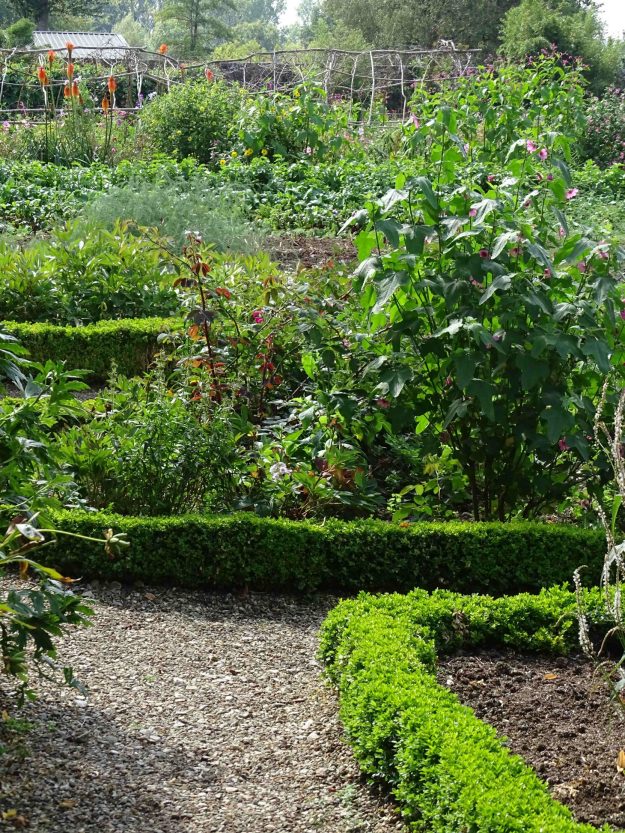 Sweet peas on a rustic framework 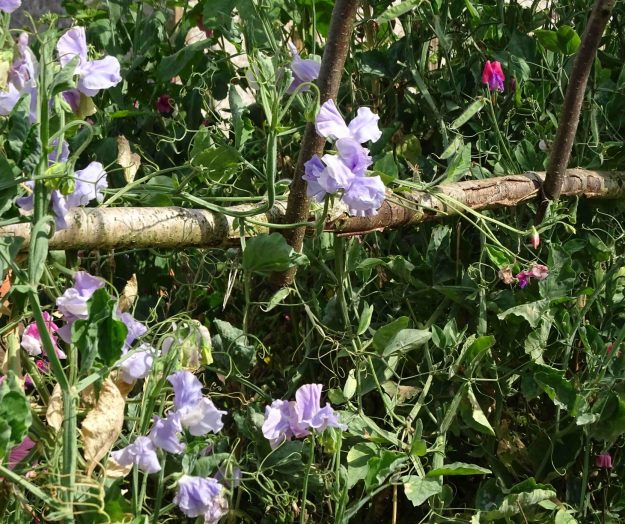 Rhubarb in a cooler section of the garden 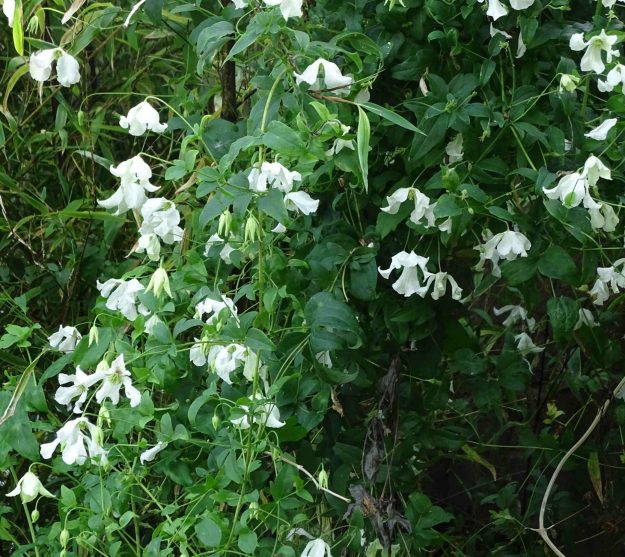 Beautiful clematis on a shady wall 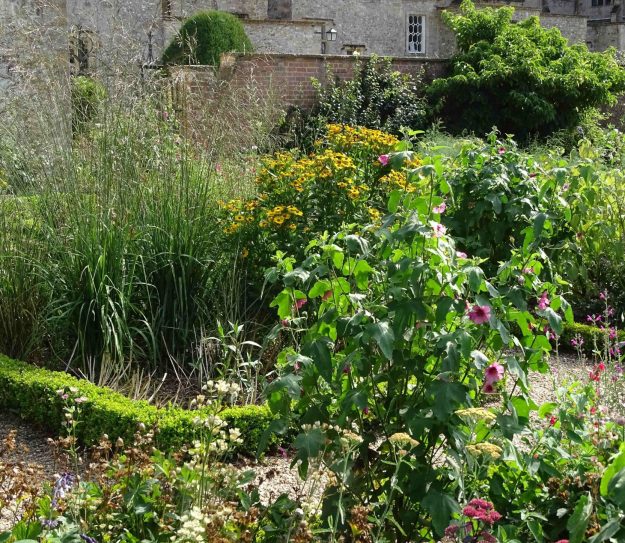 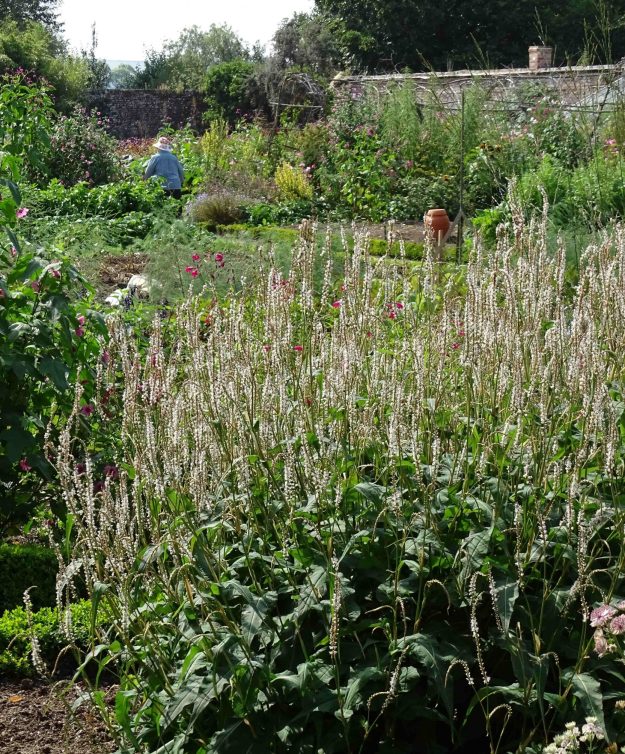 Georg Andreas Böckler (1617 – 1687) was a German architect and engineer. He also wrote about architecture and related topics such as hydraulics. Published in 1664, Architectura curiosa nova features dozens of designs for fountains, showing how water could be manipulated by means of hydraulics to create an extraordinary range of different effects.

The first section of his book discusses the internal workings of fountains, while these illustrations from the second section represent a small sample of the 71 fountain designs shown. By comparison to some of the fountains that follow later in the book they are relatively straightforward in their construction, with jets of water emanating from one central column or pedestal.

The effect of these seeming endless variations of fountain designs is rather like a plant catalogue showing different hybrid flower shapes; like a succession of dahlias with the rolled, pointed petals of the cactus varieties, or the pompons with their round, ball shapes.

Some of the fountain pedestals resemble domestic items, like candelabra; in others the water performs a trick; holding up a ball, or tells a joke, where the fountain rains down onto a figure holding an umbrella.  The texture of the water ranges from single jets sprays, to continuous surfaces, created by rows of jets placed next to each other.  When the jets are directed upwards in a circle, the water forms a bowl shape, or if the jet circle is perpendicular to the ground, a curious circular shape is formed, like a flower or a Catherine wheel, (although I don’t believe the mechanism would have spun around). 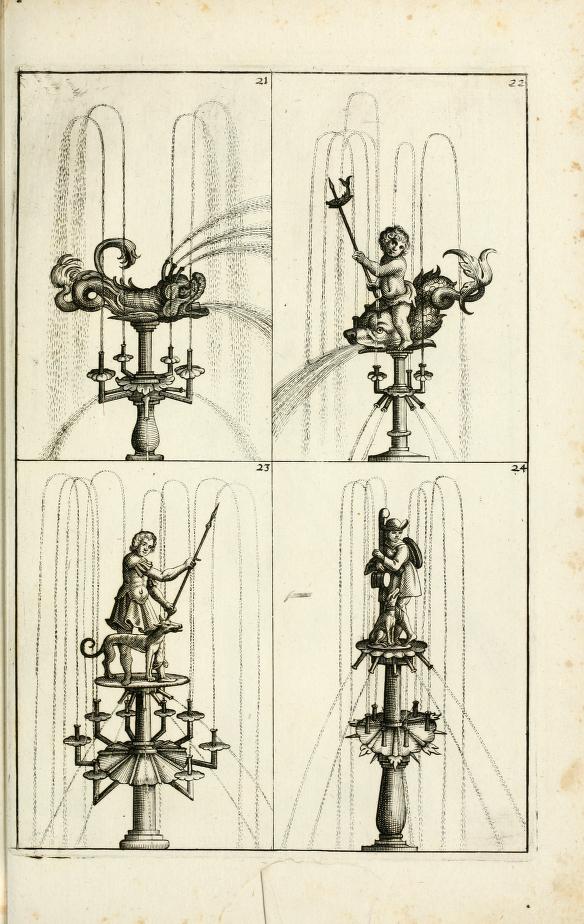 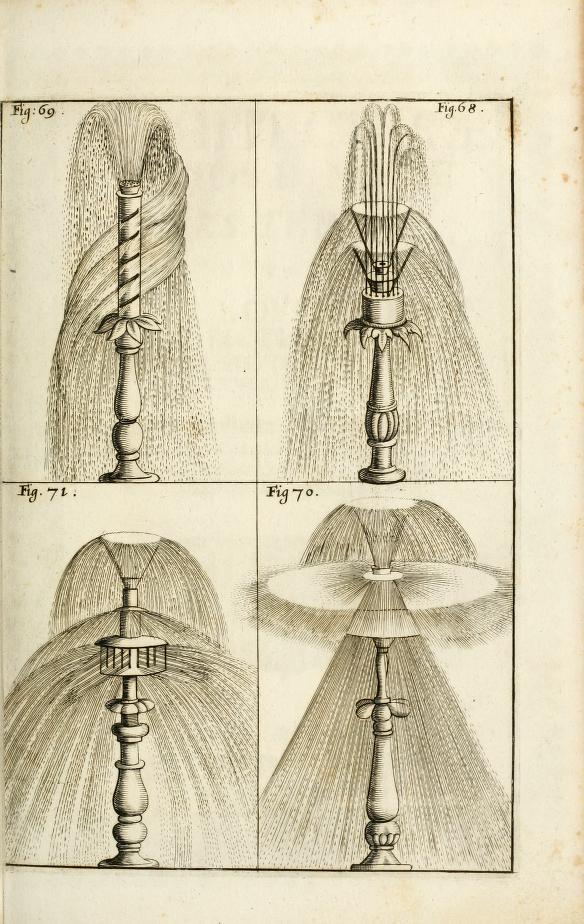 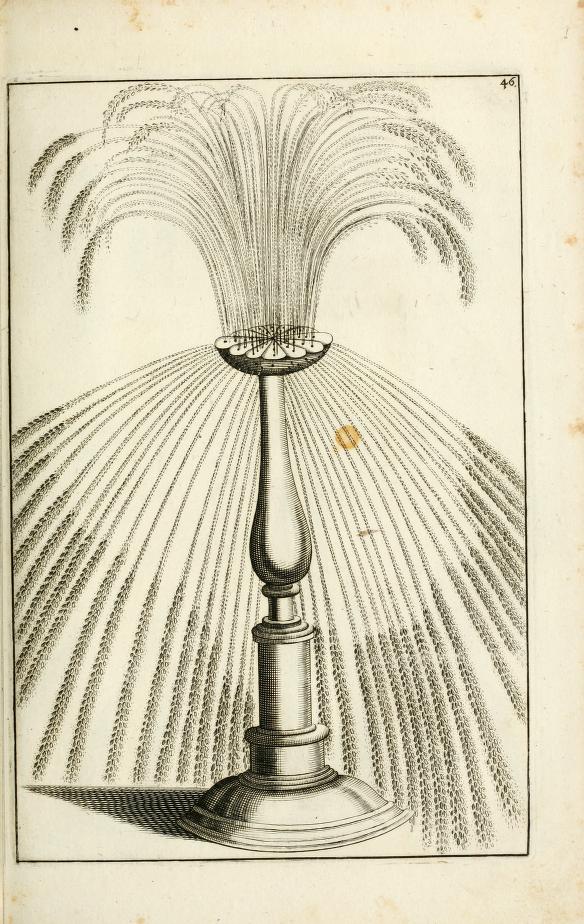 These jets seem to resemble a wheat sheaf