Inside the glasshouse at Hawkwood Plant Nursery the home of Organiclea, fruit and vegetable producers in the Lea Valley, Chigwell.

Tempted outside by the February sunshine last weekend, the unseasonable warmth happened to coincide with an open day at organic growers OrganicLea in Chingford.  And so it was at the very beginning of the vegetable growing season I found myself with a group of visitors exploring twelve acres of fields and glasshouses in the Lea Valley guided by Tim Mitchell, one of the garden’s organisers.

The OrganicLea market garden is to be found, somewhat incongruously, between streets of semi-detached houses typical of the outer suburbs of London and the eastern edge of Epping Forest.  It occupies what was previously Hawkwood Plant Nursery, the London borough of Waltham Forest’s propagation centre for amenity plants grown for use in local parks and gardens.  When this facility closed ten years ago, OrganicLea saw an opportunity to expand – they had previously operated from a community allotment – and they now lease the whole site from the council.

The majority of the gardens are on a slope and several large oak trees, some of which experts believe date from the 17th century, punctuate the growing area.  According to conventional horticultural wisdom, this might not be considered an ideal position for a market garden.  However, by following principles of permaculture, OrganicLea has been able to work with the existing topography to create a productive garden.

Tim’s personal interest in permaculture came out of an interest in ecology. “I was interested in how humans can work alongside other species without destroying the habitats or poisoning those other species. Ecological food-growing  seemed to be the best working model. Although other species often thrive in our absence, it would be nice if we could join the party without ruining it.” he explains.

Permaculture is a term first used in the 1970s by Bill Mollison and David Holmgren, the two Australian pioneers of the concept.  It stands for ‘permanent agriculture’ and seeks to find ways of cultivating food crops sustainably, in harmony with the natural environment.  Their book Permaculture One: A Perennial Agriculture for Human Settlements (1978) was followed by the establishment in 1979 of a Permaculture Institute in Tasmania.  Although Mollison spent some time as a campaigner against commercial agriculture, which he believed was damaging the environment in Tasmania, eventually he found it more worthwhile to develop ideas and teach others about sustainable growing practice, which is now a worldwide movement.

The diagram below shows how the permaculture design concept works, with the most intensive cultivation nearest to the house or settlement and much of the perimeter of the site left in a natural state, as a ‘wilderness zone’ for ‘foraging, inspiration and mediation’. 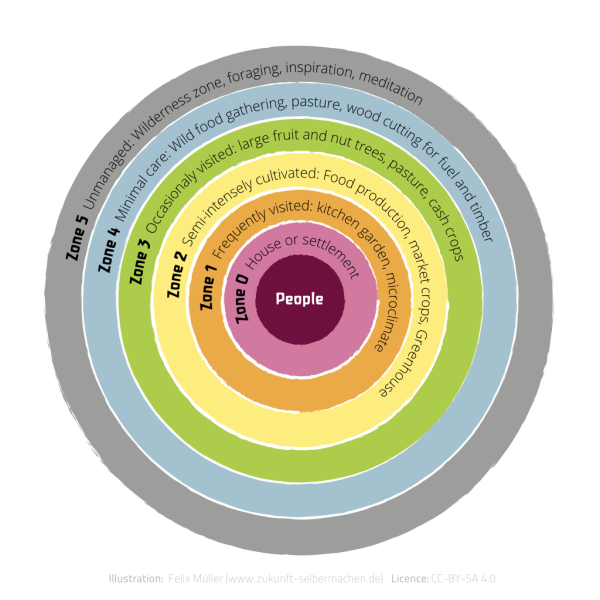 The French translation of Permaculture One: A Perennial Agriculture for Human Settlements (1978)

Standing at the top of Entrance field, the first part of the site to be cultivated by OrganicLea, Tim pointed out a swale, or ditch, running the length of the cultivated area.  This, he explained, is the first line of defence against the force of rainwater running off the wooded hill above, catching some of it and and preventing erosion of the soil.  Beneath this, long, curved beds of vegetables divided by bark chipping paths follow the natural contour of the hill and absorb the remaining rainwater, reducing the frequency the beds need to be hand watered.

All the outdoor crops are cultivated by hand using the ‘no dig’ method.  Compost is added to the beds annually which smothers weeds and builds up topsoil without disturbing the soil structure beneath.  These beds operate on a ten year crop rotation plan, with two years of this cycle devoted to feeding the soil using a green manure crop.

At the centre of the site are the commercial glasshouses OrganicLea inherited ten years ago.  Tim explained, “The glasshouse is a boon as it allows us to run a viable commercial operation.  We can grow higher value crops like tomatoes and chillies which are sold to the public but also to restaurants.”  Up to sixty varieties of chillies are grown and are popular at OrganicLea’s three local market stalls.  Except for some propagation tables, the glasshouse is unheated, but even in February many of the long beds bordered by old scaffolding boards are full of winter salads.

The surrounding woodland has not been cleared but is managed for wildlife.  Out of twelve acres, just six are under production and the OrganicLea team is trying to monitor and increase biodiversity.  At the edge of this ‘wilderness zone’ there’s a poet’s corner dedicated to John Clare.  Tim says, “We like to think he passed through the woods here when he was living in Epping Forest.”

So today the last word goes to Clare – these lines are from London versus Epping Forest written when Clare was resident at the High Beach Asylum in Epping Forest between 1837 – 41.  Although London has now overwhelmed so much of the natural landscape, from this spot surrounded by trees it is somehow possible to experience a sense that nature is still greater than human activity.

Thus London like a shrub among the hills
Lies hid and lower than the bushes here.
I could not bear to see the tearing plough
Root up and steal the forest from the poor,
But leave to freedom all she loves untamed,
The forest walk enjoyed and loved by all.

Rhubarb in the Old Kitchen Garden.

Lettuce, with garlic in the background. 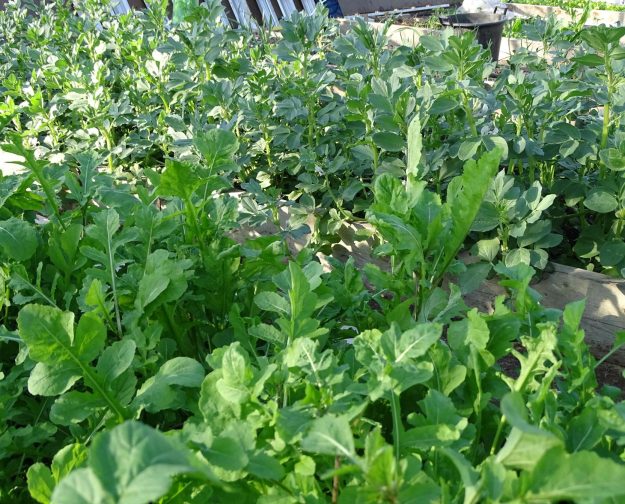 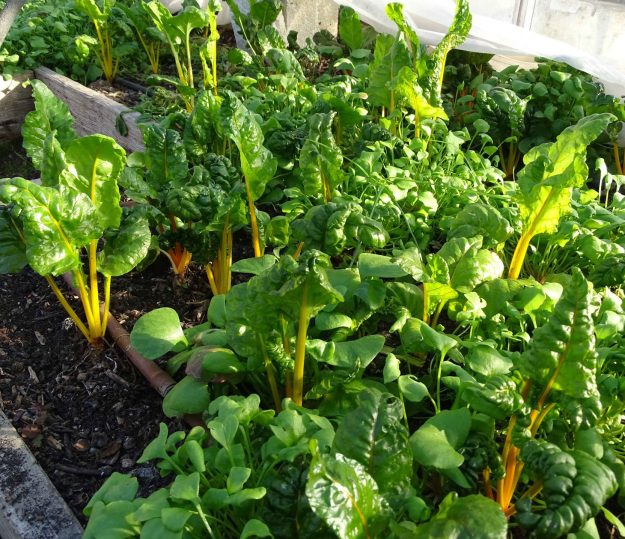 Propagators on heated bench. The black pots in the background will soon be used for the chillie crop. 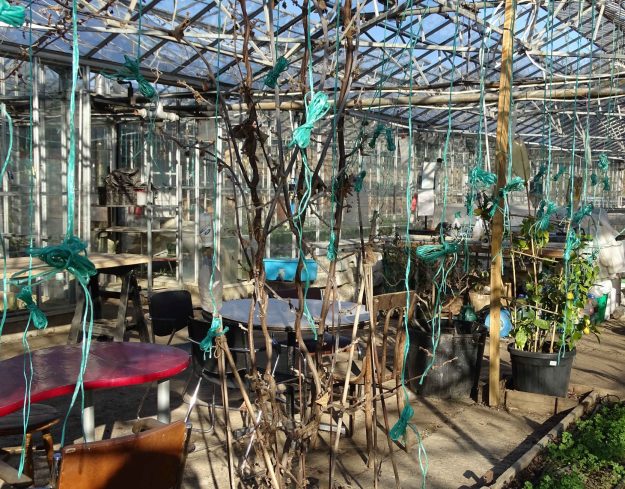 Inside the glasshouse. The green string is used to support beans, tomatoes and cucumbers. 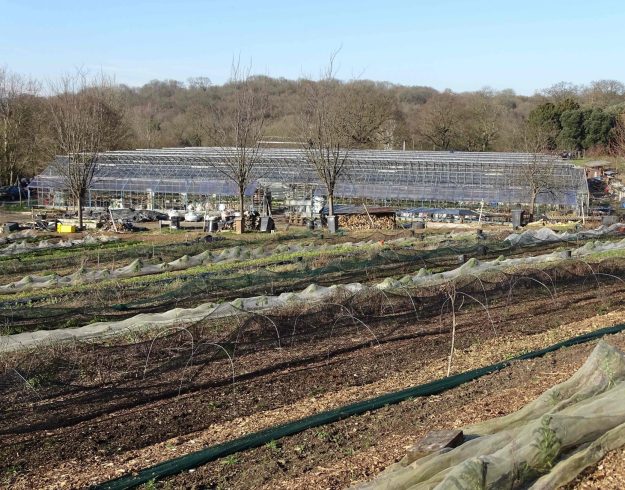 The glasshouse from the top of Entrance Field

Gloves drying out on trellis.

OrganicLea – well worth looking out for monthly open days and events.