from ‘The Herball, or General Historie of Plantes’ by John Gerard (1597)

To discover the range of plants that were available and grown in late 16th century gardens The Herball, or General Historie of Plantes is an invaluable resource.  The book records and illustrates plants known to European cultivation including trees, shrubs, plants grown for the kitchen and garden, herbs, wildflowers and weeds. At the same time the author John Gerard provides insights into contemporary domestic culture, such as the use of plants for medicine, decorating houses and even feeding caged birds, while his travels around London and beyond reveal the places where wild plants can be found.

To give a flavour of the book, here follows a selection of plants commonly known at that time as marigolds. Gerard makes this observation about sunflowers, then known as the Marigolde of Peru, expressing the wonder at their size that we still share today

The Indian Sunne or the golden flower of Peru, is a plant of such stature and tallnesse, that in one sommer being sowen of a seede in April, it hath risen up to the height of fourteene foote in my garden, where one flower was in waight three pounde and two ounces, and crosse overthwarte the flower by measure sixteene inches broade.

Gerard records three other plants that still bear the common name of marigolds. Calendula or the pot marigold appears illustrated in several double forms as well as a single and Gerard observes that, ‘The Marigolds with double flowers especially, are set and sowen in gardens’.  He also says that the marigold is called Calendula because of its long flowering season; ‘it is to be seene to flower in the Calends of almost everie moenth.’ 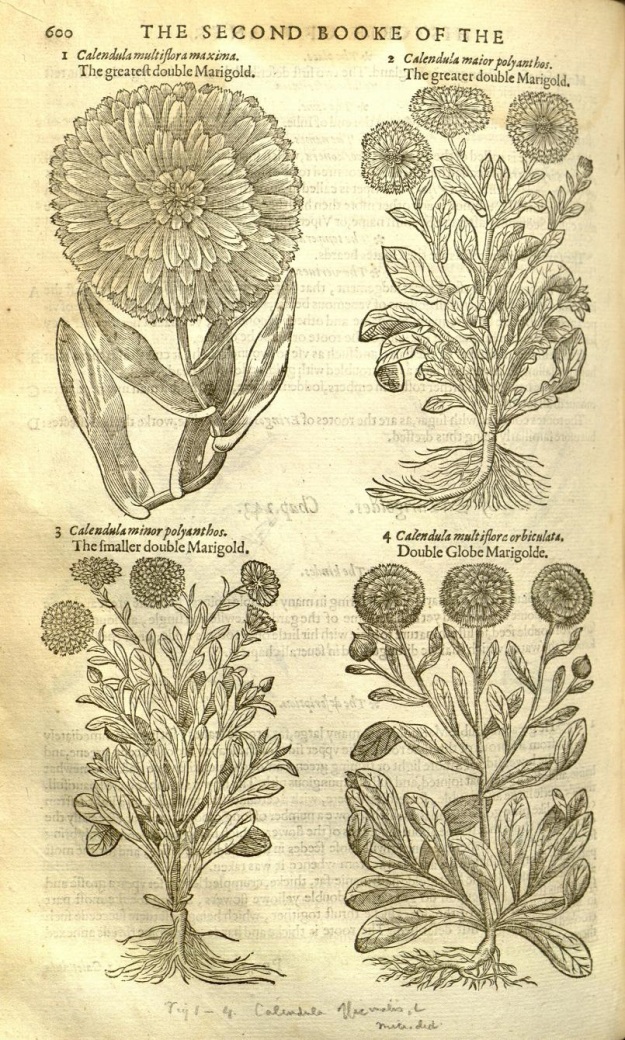 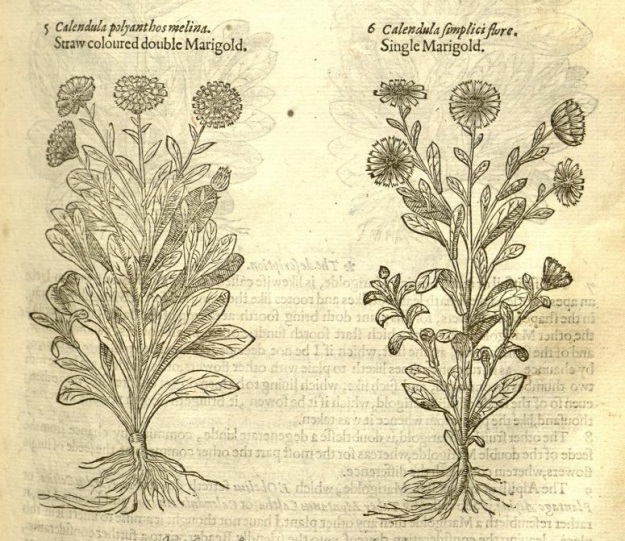 Gerard describes the African marigold as having ‘verie faire & beautifull double yellow flowers, greater and more double than the greatest Damaske Rose, of a strong smell, but not unpleasant’.

Both the African and French marigolds described by Gerard are actually from the genus tagetes which originates mostly from North and South America.  The plants shown in these woodcuts are not dissimilar from the tagetes hybrids available today, mostly sold as summer bedding.  The woodcut showing the great single French marigold reminds me of Tagetes patula with single flowers of burnt orange which can grow up to 1m high. They look spectacular in the late summer borders at Great Dixter.

Of both African and French marigolds Gerard says ‘They are cherished and sowen in gardens every yeere’. Today marigolds (and sunflowers) of all types look great in the kitchen garden or allotment – there is something about the yellow and orange flowers that blend especially well with brassicas.  As well as attracting pollinators it is thought that tagetes protects crops against pests such as whitefly.