At this time of year I feel a certain nostalgia for my old allotment.  Late July would usually see a harvest of beans, courgettes, beetroot and lettuce.  And if the crops were disappointing, there was always the consolation of blackberries which could be gathered in abundance in the hedges around the perimeter of the site.

These woodcut illustrations from John Parkinson’s Paradisi in sole paradisus terrestris (1629) convey the character of home grown vegetables so successfully.  Many plants are drawn with their roots, foliage and flowers, giving a sense of their true scale, in contrast to the trimmed vegetables we find in supermarkets today.   Bold, dark lines evoke the texture of the cabbage leaves and the strong artichoke stems bearing their enormous flower heads.

Written in English, Paradisi in Sole Paradisus Terrestris (or, Park-in-Sun’s Terrestrial Paradise) by apothecary and botanist John Parkinson, describes how English gardens were cultivated in the early 17th century. Divided into three sections Parkinson discusses the flower garden, kitchen garden and fruit garden with instructions how to ‘order’ or set these out, as well as giving advice about improving the soil, garden tools and the cultivation of plants.  Most of the illustrations were original woodcuts by the German artist Christopher Switzer.  Parkinson’s garden was in Long Acre, London, close to Trafalgar Square.

Parkinson has plenty of advice to those wanting to establish a kitchen garden, or garden of herbes and his first consideration is where this section of the garden should be situated.  Parkinson has already suggested that the flower garden

‘be in the sight and full prospect of all the chiefe and choicest roomes of the house; so contrariwise your herbe garden should be on the one or other side of the house .. for the many different sents that arise from the herbes, as Cabbages, Onions, &c are scarce well pleasing to perfume the lodgings of any house;’

As well as the disadvantage of the smell of cabbages, Parkinson also points out that a kitchen garden is by its nature in a state of transition, with plants continually being sown and harvested, so it will not always always be neat and pleasing to look at – another reason for siting this garden away from the house:

‘As our former Garden of pleasure is wholly formable in every part with squares, trayles and knots, and to bee still maintained in their due forme and beautie: so on the contrary side this Garden cannot long conserve any forme, for that every part thereof is subject to mutation and alteration.’

As well as supplying the house with produce, another priority for Parkinson’s kitchen gardener is saving seed for future use. He recommends that the largest and best plants are chosen to set seed.  Here he explains how to harvest seeds of lettuce

‘Before your Lettice is shot up, marke out the choysest and strongest plantes which are fittest to grow for seede, and from those when they are a foote high, strippe away with your hand the leaves that grow lowest upon the stalke next the ground, which might rot, spoyle or hinder them from bearing so good seede; which when it is neere to be ripe, the stalkes must be cut off about the middle, and layde upon mats or clothes in the Sunne, that it may there fully ripen and be gathered; for it would be blowne away with the winde if it should be suffered to abide on the stalkes long.’

As an apothecary, Parkinson is well placed to advise on medicinal or physicall herbes.  He records that some country gentlewomen grow these herbs in sufficient quantity for their own families and to share with less well off neighbours.

‘These (herbs) are grown ‘to preserve health, and helpe to cure such small diseases as are often within the compasse of the Gentlewomens skils, who, to helpe their own family, and their poore neighbours that are farre remote from Physitians and Chirurgions, take much paines both to doe good unto them, and to plant those herbes that are conducing to their desires.’

The following images show some of the staple vegetables that would have been grown in 17th century England such as cabbages, root crops like carrots and parsnips, onions and leeks, together with more exotic introductions like potatoes and melons.  There are also indigenous wild plants like goat’s beard which are no longer grown for food.  The complete text can be found at the Biodiversity Heritage Library – see link below. 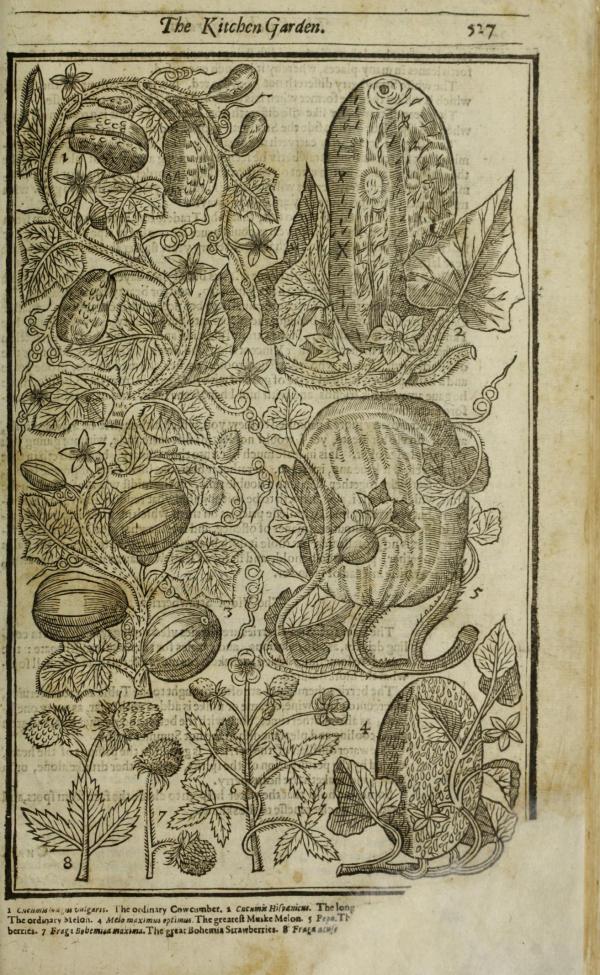 Parkinson acknowledges that melons would be difficult to grow in the English climate and suggests a south facing slope with plenty of manure added to the ground. 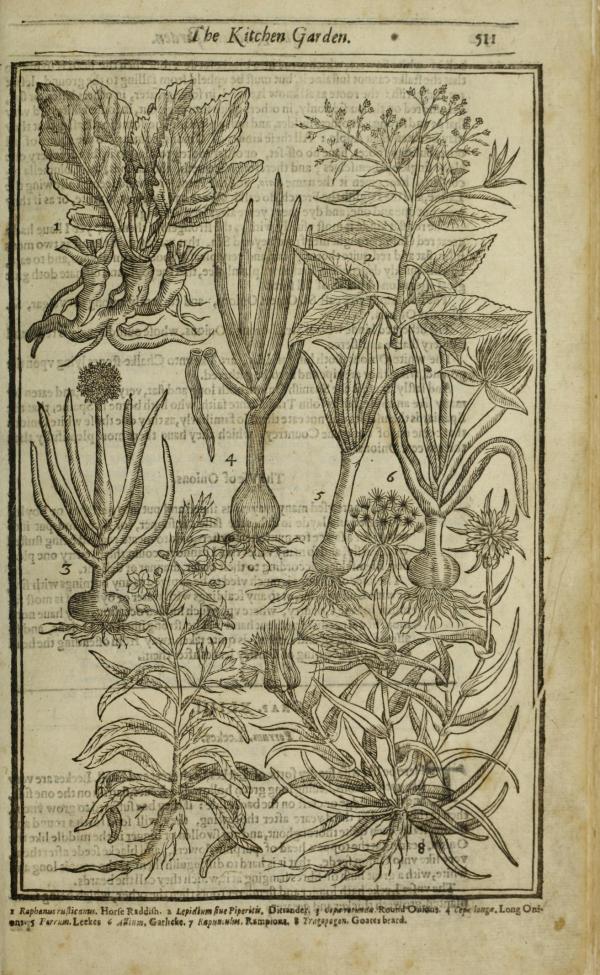 The roots of Goat’s beard or Jack Go to Bed at Noon were eaten cooked in butter.  This plant is related to salsify. 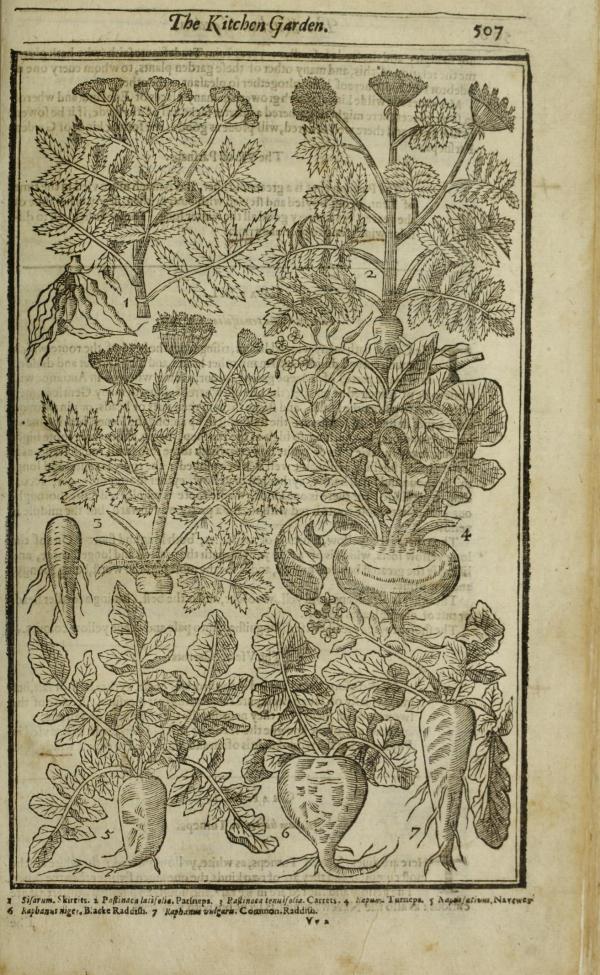 The nasturtium (4) does not look like the plant we think of as a nasturtium today.

Paradisi in sole paradisus terrestris (John Parkinson) at the Biodiversity Heritage Library. (The section about the Kitchen Garden begins on Page 461).