Autumn is the time to plant tulips, so it seems strangely apt that John Parkinson (1567 – 1650) should describe a yellow tulip grown in the early 17th century as having the colour of a dead leaf;

A sullen or smoakie yellow, like a dead leaf that is fallen, and therefore called, Fuille mort

He describes other yellow tulips just as evocatively,

A pale cloth of gold colour

A Custard colour a pale yellow shadowed over with a browne ..

Written in English, Paradisi in Sole Paradisus Terrestris (1629) (or, Park-in-Sun’s Terrestrial Paradise) by apothecary and botanist John Parkinson describes how English gardens were cultivated in the early 17th century. Divided into three sections Parkinson discusses the flower garden, kitchen garden and fruit garden with instructions how to ‘order’ or set these out, as well as giving advice about improving the soil, garden tools and the cultivation of plants.  Most of the illustrations were original woodcuts by the German artist Christopher Switzer. Parkinson was apothecary to James I and royal botanist to Charles I.  His garden was in Long Acre, London, close to Trafalgar Square.

In the book Parkinson lists well over one hundred varieties of tulip then available, including the striped, feathered and flamed tulips that were so popular in 17th century.  Amongst them Parkinson lists white tulips with purple edges, a white speckled with a reddish purple which ‘holds its marks constant’, a ‘Crimson Fooles Coate, a dark crimson, and pale white empaled together’, a tulip of a ‘deepe Orenge colour’, ‘a red with small yellow edges’, and a ‘Fooles Cappe, that is, with lists or stripes of yellow running through the middle of every leafe of the red..’

Parkinson could not have understood the process by which a viral infection causes the pigment in tulip petals to ‘break’, and produce the striped effect.  But he makes a remarkable observation connecting the spectacular patterns shown by these tulips with disease.  Parkinson notices a ‘weaknesse‘ or loss of vigour in some plants whose flowers start off as a solid colour, but over several seasons develop the characteristic white streaks, believing this to be caused by a ‘decay of the roote’.

He also links this beauty with transience, identifying the point when the diseased tulip will die, as the moment when the bloom is most beautiful:

.. this extraordinary beauty in the flower, is but as the brightnesse of a light, upon the very extinguishing thereof, and doth plainly declare, that it can do its master no more service, and therefore with this jollity doth bid him good night. 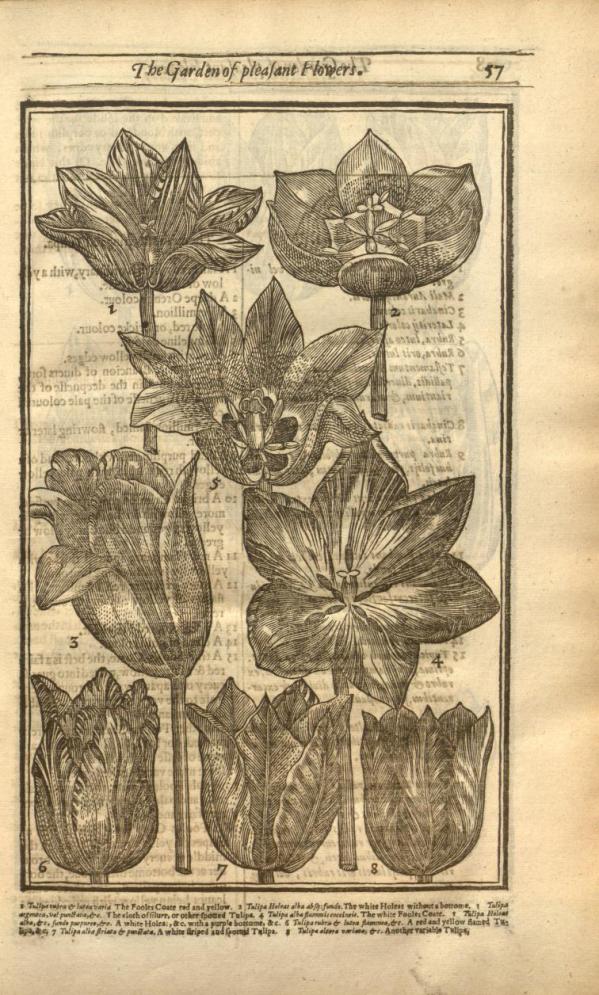 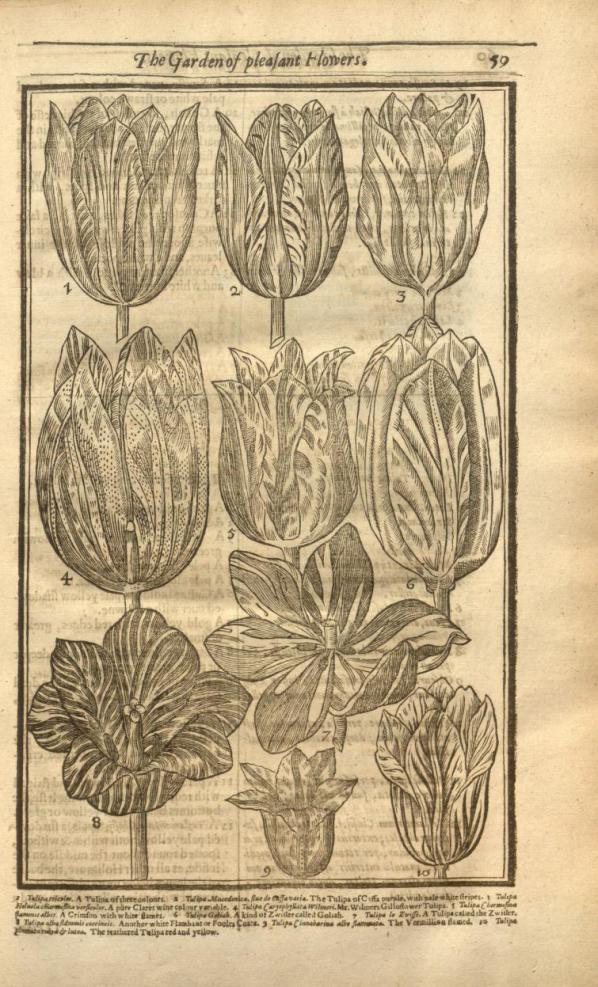 1. A Tulipa of three colours 2. the Tulipa of Caffa purple, with white stripes 3. A pure Claret wine colour variable 4. Mr Wilmers Gilloflower Tulipa 5. A Crimson with white flames 6. A kind of Zwitser called Goliath 7. A Tulipa called Zwitser 8. Another white Flambant or Fooles Coate 9. The Vermillion flamed 10. The feathered Tulipa red and yellow

The section describing mid-season yellow flowering tulips also contains some intriguing green tulips, one of which is called the Parret.

Unto these may be added the greene Tulipa, which is also of divers sorts.  One having a great flower of a deep greene colour, seldom opening it self, but abiding alwaies as it were halfe shut up and closed .. Another of a yellowish or palish greene, paned with yellow, and is called, The Parret &c. with white edges. A third of a more yellowish greene, with red or purplish edges ..

Interestingly Parkinson’s parrot tulip does not seem to have the ruffled petals we associate with these flowers today, but it is parti-coloured, meaning that it consists of two or more different colours. This term is still commonly used to describe the plumage of parrots.

The first green tulip mentioned in Parkinson’s list sounds rather like a modern variety Tulipa ‘Evergreen’ which stays green throughout the flowering period.  Others sound like the Viridiflora tulips with the characteristic green bands on the petals.  Many of the modern parrot tulips still show some green colouration in their petals.

The parrots shown below (some of them green) are illustrated by John Jonston (1603 – 1675) and come from a natural history of birds published in 1657.  Psittacus minor looks very much like the ring-necked parakeet, originally from India and now resident in some parts of the UK. 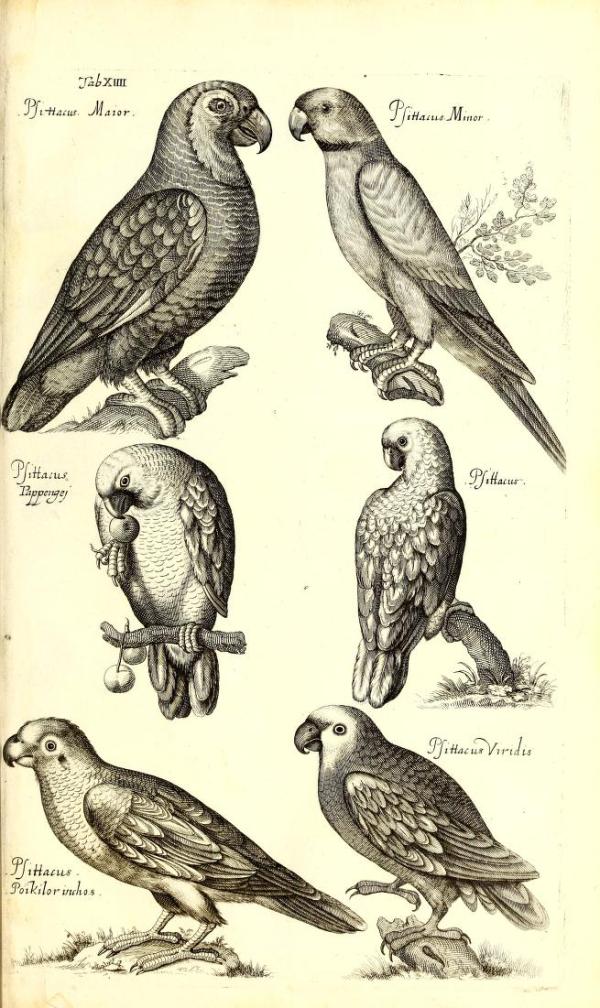 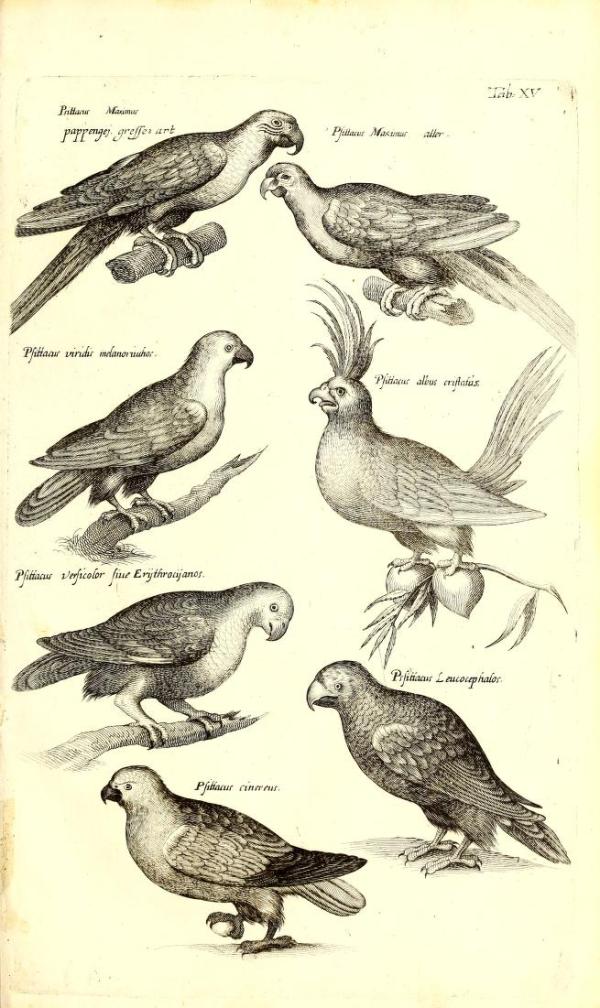 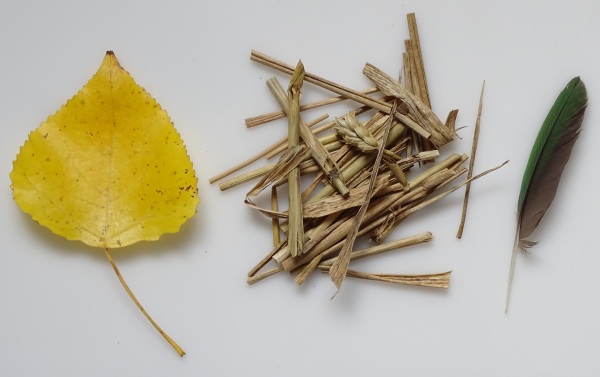 Link to Parkinson’s text at the Biodiversity Heritage Library: