Between the first edition of Gardens for Small Country Houses published in 1912, and the fourth which appeared in 1920, the world had changed.  The effects of the Great War on the population and economy of the UK were profound and those whose wealth and status had insulated them in the past faced the challenges of a new economic and political climate.

But change brings opportunity.  In the preface to the fourth edition, a collaboration between designer Gertrude Jekyll and Lawrence Weaver, architectural editor of Country Life, they anticipate the rise in popularity of the small country house, both with wealthy down-sizers and new owners.

Without seeking to fill the role of gloomy prophet, we cannot escape the belief that the changes in social life and habit, which are the mark of our economic troubles, are striking at the maintenance of great gardens, as of great houses, in this pleasant land. But if those who have built up, kept, and loved so well their spacious gardens, must needs be content with smaller houses, and if, as seems likely, the wider distribution of wealth will lead to-morrow to the creation of many more small country houses, the art of making gardens for such houses will increase in importance.

Clearly, to the Country Life reader a ‘small’ house was, by modern standards, quite substantial.  See below for an example of a building Jekyll and Weaver describe as a small cottage: 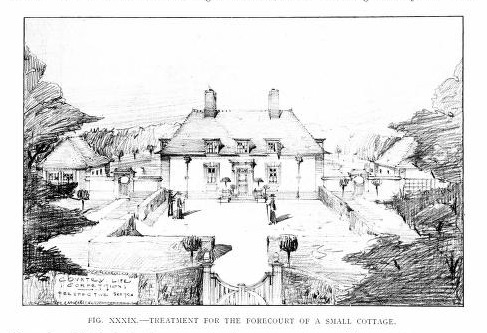 In the book Jekyll and Weaver suggest how a harmonious relationship between house and garden might be created in terms of its scale, features, planting and placement the wider landscape.  Their expertise ensures that the case studies used for approaches for garden design in various locations in the UK are still illuminating today, even if our tastes in garden styles might have moved on.

Jekyll identifies both medieval and Tudor gardens as inspirations for the ‘new’ gardens she and others were making in England at this time.  Both Jekyll and Weaver admired the hillside garden at Owlpen Manor in Gloucestershire (now a hotel), an example of a formal garden where large, bold yew topiary and hedging are used to anchor the house to its surroundings.

.. with what modesty the house nestles against the hillside and seeks to hide itself amidst regiments of yews. Great skill has been shown in their planting, for they emphasise the drops between the existing levels of the terrace, even though they partly veil them. 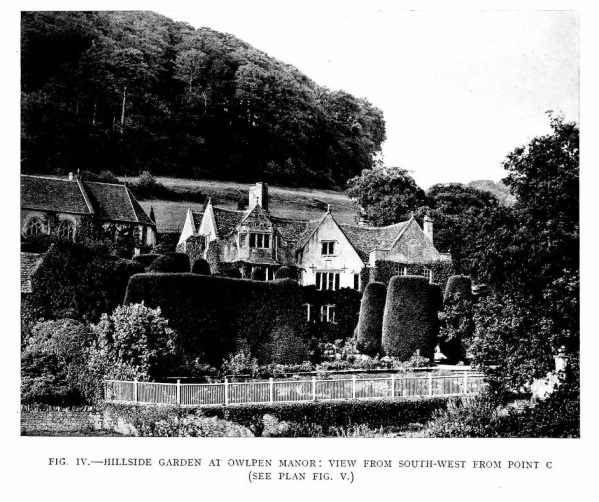 Using photographs and plans Jekyll and Weaver explain how the changes of level have been used.  Without this terracing and the dramatic yew planting, the house might appear to be about to fall off this steep hillside, but actually looks secure and intriguing, partly obscured by foliage.  The repeated yew also also echoes the mass of the woodland above the house, which otherwise might feel oppressive.

Owlpen: view from north-west from point B (see plan) 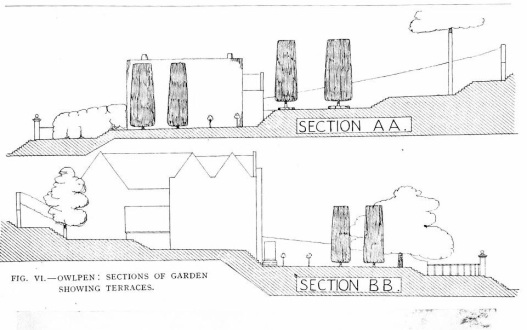 The climber on walls of the house has been clipped very precisely at different levels (below the window on the right of the picture and above on the left).  These solid blocks of foliage help to reinforce the formal feel of the planting.  The dark yews contrast with the pale stone of the house and also form a backdrop for the beautiful gateway with its curved steps.

Curved stone steps appear as a design feature in many new gardens shown in this book, including those pictured below at Highmount, in Surrey.  Also located on a steep slope, these curved steps were used by Jekyll as part of an ambitious design for the garden of a new house. 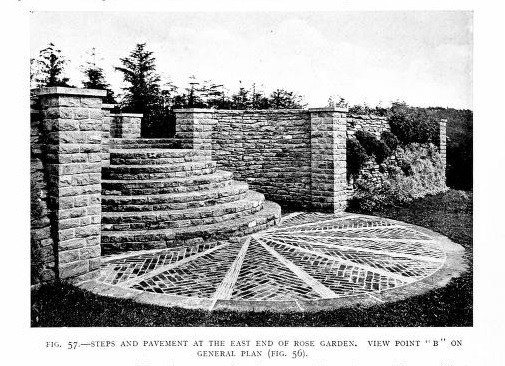 The garden ground, all on the southern face of the hill .. had already been laid out to a certain degree when the garden designer took it in hand.  Tennis lawn, croquet lawn and bowling green had been levelled and made; but the steepness of the remainder composed of grassy slopes between clumps of shrubs and flowers of no particular design, was found to be incommodious, and great need was felt for something more restful and systematic.

Jeykll’s solution was to dig into the chalk hillside to create a large level space, and install retaining walls to provide some shelter in this exposed site.  She acknowledges that this solution was expensive and applauds her client’s willingness ‘to face the necessary outlay, by no means a slight one’.

One of the features of Jekyll’s general plan of the garden is a rose garden, at the bottom of the slope with a water lily tank at one end, and a six foot high retaining wall running along the entire length, the top of which was planted with plants that would tolerate the free draining and exposed position.  Jekyll says,

The wall is in full sun, and the good plants and sub-shrubs we have from the Mediterranean region – lavender, rosemary, santolina, othonna and so on, with pinks, stonecrops and several of the rock loving campanulas of the Alps (to name only a few of the plants utilised) – rejoice in the full southern exposure and the brilliant, unveiled light of the high elevation.

Photographs of the garden (taken two years after planting) show the extent of the works.

From the middle of the rose garden. View point C on general plan. 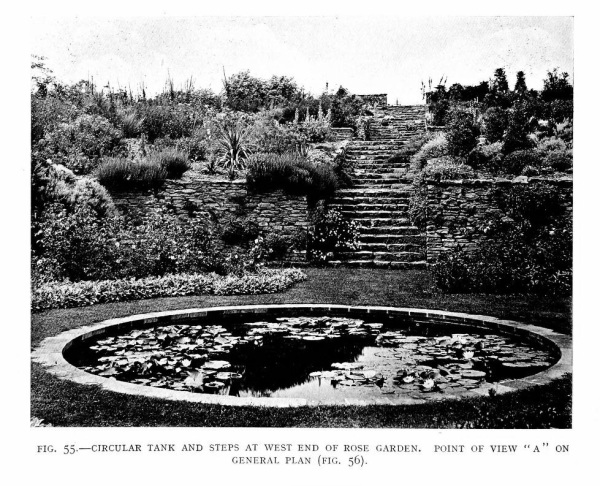 Circular tank and steps at west end of rose garden. Point of view “A” on general plan. 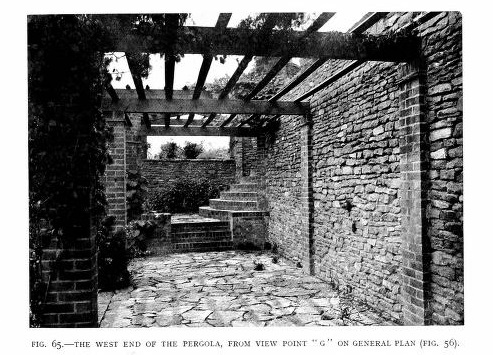 The west end of the pergola, from view point “G” on general plan.

The garden-houses, from view point “F” on general plan.

Many of Jekyll’s planting plans are reproduced in the book, showing her method of planting in drifts, using groupings of the same plant to amplify their effect.  For Highmount Jekyll talks about the importance of having a coherent planting scheme to define each section of the garden.

Offering to the eye one clear picture at a time they rescue the beholder from the distracting impression of general muddle and want of distinct intention that is so frequent in gardens and so wasteful – wasteful because a place may be full of fine plants, grandly grown, but if they are mixed up without thought or definite scheme they only produce an unsatisfactory effect, instead of composing together into a harmonious picture.

The mixed borders of the west walk (above) featured golden privet, box and elder and a single yellow rose ‘Jersey Beauty’ as well as rudbeckia, helenium, anthemis, verbascum, tansy and yellow snapdragon.  Splashes of blue were provided by lavender, delphinium and campanula.  Nothing if not colourful.